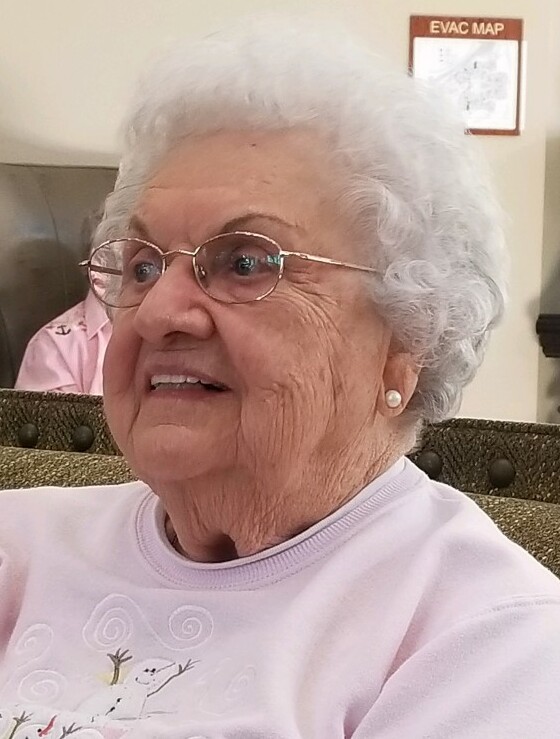 Glennis Ruth Houseman died peacefully January 20, 2023, at the age of 100, at Watercrest Senior Living Center in Lady Lake, Florida. She was born October 15, 1922, in Fort Madison, Iowa, to Lloyd and Hazel (Glass) Crawford.  She attended school in Fort Madison, Iowa, graduating in 1940. She married her childhood sweetheart, Ralph E. Perry, and after his military service in WWII they began their family.  There were four children born of that marriage.  Daughter Rebecca Baty currently lives in Summerfield, Florida. Her son, Ronald Perry, and his wife Marilyn currently live in Bettendorf, Iowa.  Her daughter, Bonnie , with husband Paul Shovlain, also live in Summerfield, Florida. Her youngest daughter, Ruthanne and her husband Dennis Thompson, live in Humboldt, Iowa.

Glennis was blessed to marry three more times after the death of her first husband in 1967.  She also was married to Donald Allderson in Ottumwa in 1970.  After his death in 1974, she united in marriage to John Hoban in Ocala, Florida.  After his death, she married Gerald Houseman in Summerfield, Florida on October 8,1990

Glennis loved to host dinner parties and was a terrific cook.  She loved music and sang in Sweet Adalines and many church chiors.  She was as avid golfer and Maj Jong player.  But mostly she loved being with her children and grandchildren.  They celebrated her 100th birthday with her last October and it was a great celebration.

Glennis is survived by her four children, a sister, Billy Jean Brown of Danville, Iowa; and a brother David Crawford of Grenich, Connecticut.  She is also survived by seven grandchildren and 11 great-grandchildren.  She was preceded in death by her parents, husbands her son-in-law, Walter Baty, and grandchild, Phillip Baty.

Glennis will be greatly missed by her family and many friends.  She left a great legacy of love and enjoying life to the fullest.

To send flowers to the family or plant a tree in memory of Glennis Houseman, please visit Tribute Store

Share Your Memory of
Glennis
Upload Your Memory View All Memories
Be the first to upload a memory!
Share A Memory
Send Flowers