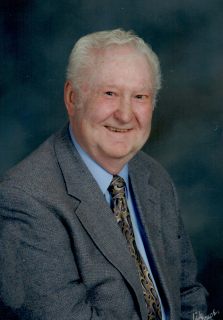 W. Elton Clemmons (Elton) went to be in the arms of His  Lord and Savior, Jesus Christ on January 6, 2023. He was a member of Christ the King Anglican Church.

Elton was born in Ocala, Florida on August 4, 1929 to Harmon Leroy Clemmons and Grace Smith Clemmons of Citra, Florida. He grew up in Citra, Florida where he attended Citra School through his sophomore year in high school. He then attended and graduated from high school at Emory University Academy in Oxford, GA. He entered Emory Junior College in Valdosta, Georgia where he met his wife, Barbara Lawson (known as Bobbie) while she was attending Georgia State Women's College (now, Valdosta State University). He graduated from Emory Junior College in 1948 and married Bobbie on September 11, 1948.

They moved to Gainesville, Florida where he attended the University of Florida. Elton was a member of Sigma Chi Fraternity and a member of Phi Kappa Phi Honor Society at the University of Florida.  He graduated with a Bachelor degree in Civil Engineering in 1951. At that time, he and Bobbie moved to Ocala, Florida where he worked one year for Edward R. Lamp Engineering.

For many years, he and his family owned citrus groves, cattle and farm land.

Elton dedicated his business to God with his goal at Moorhead being, in his own words,“to provide service to our clients while maintaining a commitment to fair and honest business practices.” There is a plaque displayed at Moorhead Engineering Company saying “God owns my business.”

Elton was very active in the Ocala community. In 1977, he was Chairman of the Committee of 100. He served as a member and  Director of the Ocala/Marion County Chamber of Commerce, as well as Co-Chairman of  the Chamber's Building Expansion Fund Drive in 1986. He was Director of Mid-State Federal Savings and Loan from 1978 to 1993 and served as Board Chairman from 1980 to 1987. He was Chairman of Mid-State Executive Committee from 1987 to 1993 and sat on AmSouth Bank Advisory Board from 1993 to 1996 after they purchased Mid-State Federal. He was a member of Ocala Kiwanis Club for over 50 years and served as President in 1969 and in 1970.

In 1985 Elton was one of the prominent business leaders to receive the “Florida Business Journal Outstanding Community Service” award. In 1996, he was named “Small Business Person of the Year” by the Ocala/Marion County Chamber of Commerce.

Elton and Bobbie were active members of First United Methodist Church for over 30 years. During that time he and Bobbie taught the youth of the church, taught Sunday School, and Elton served on the official board and as lay leader. Elton was also president of the “Bible in Schools” program. They then became members of Grace Episcopal Church where Elton served on the Vestry and two terms as Senior Warden. Elton and Bobbie were founding members of Christ the King Anglican Church of Ocala where they were active members until their deaths.

He and Bobbie traveled abroad on many mission trips with their involvement in Men for Missions and in Bobbie's Pastoral Counseling classes which were taught annually at South Asian Institute of Advanced Christian Studies in Bangalore, India for 14 years. Elton served as President of Men for Missions International which is an extension of OMS (Oriental Missionary Society).

Elton is preceded in death by his wife, Bobbie, with whom he had a wonderful marriage for almost 60 years; parents, Harmon and Grace Clemmons, and older brother, H. Benjamin Clemmons. He is survived by his younger brother, H.L. Clemmons, Jr and his wife, Mary Fred;Jean Clemmons (wife of Benjamin), his children William Elton Clemmons, Jr. (Bill) and his wife, Stephanie Michael of Citra, FL; Barbara Lynn Nilson and her husband, Cliff of Tallahassee, FL; and Julia Gail Kesselring and her husband, Andy of Ocala, FL.;  Elton is survived by nine grandchildren:  Mike Paramore, Stacey Gilmere, Jonathan Nilson, Rebekah Clemmons Gibson, Sara Clemmons Gilley, Stephanie Kesselring Pharr, Brittany Kesselring Huddleston, Emily Clemmons Brown, and William Nilson and fifteen great grandchildren.He is also survived by his loving companion, Sandra Jean Kinsey, who faithfully, graciously, and lovingly cared for Elton. And he is survived by his faithful cat, Princess Missy Clemmons.

His joyful and generous heart will be greatly missed. He has left us with a wonderful legacy, from generation to generation, of an abundant life of service to Jesus Christ our Lord.

The visitation will be held on Sunday January 29, 4-6 PM at Hiers-Baxley Funeral Home on 910 SE Silver Springs Blvd, Ocala, Florida 34470

The memorial service will be held on Monday January 30, 11 AM at Christ the King Anglican Church: followed by a reception at the church.

The interment service will be at the Citra Cemetary, 2 PM.

In lieu of flowers, donations may be made to Hospice of Marion County.

Share Your Memory of
Elton
Upload Your Memory View All Memories
Be the first to upload a memory!
Share A Memory