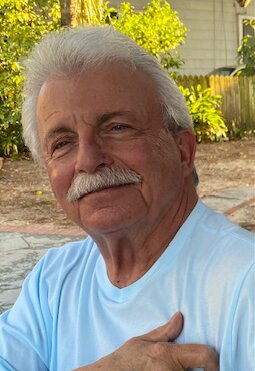 James D. Reynolds, Jr. of San Antonio, Florida peacefully passed away on October 29, 2022, at the age of 76 surrounded by loving friends and family.

Jim was born on August 22, 1946 to father James D. Reynolds, Sr. and mother Doris Reynolds in Bellmawr, NJ.  Shortly after entering the book printing trade, he answered his country’s call to duty and joined the United States Marine Corps in 1966. He served honorably at various duty stations until he returned home in 1969.  For the rest of his life, he was a proud member of that brotherhood – as Jim would tell you, “There are no Ex-Marines”.

In 1972 he married Frances DeVitis (now Mancini), and the family expanded with daughters Andrea and Dana.  Although Frances and Jim ultimately parted, they both worked to prioritize family time for the girls.  Jim spent every holiday and life milestone with his daughters and later with their families also.

Although he never pursued formal higher education, Jim was one of the smartest and sharpest people you’d ever meet.  All his years spent printing educational books was not wasted – his work entailed reading every book that came through his department from cover to cover, and had tremendous recall and understanding of all that information.  His family always kept an eye out to try and send him for Jeopardy! tryouts, but the timing and location never quite worked out.  Jim took up golf instead in his later years, and drew great enjoyment from it, but his buddies would tell you that he probably had a better chance at Jeopardy! than at making it into the PGA.  He was friendly, open to conversation, erudite, and widely regarded by those that knew him as a good man, father, and grandfather.  He was a lifelong baseball fan, especially of the Philadelphia Phillies – a passion taught to him and shared by his father, Jim Sr.  The Phillies’ performance in the 2022 post-season was a real source of enjoyment for Jim.

Jim eventually moved to Florida to be with the love of his life, Lorraine Gennola, who was a partner to him in these recent years, and who provided great comfort and support to him through his illness.

Jim was preceded in death by his parents, James D. Reynolds, Sr and Doris Reynolds.  He is survived by his sister Jane Petrilli and her husband, Joseph, his children Andrea Pizzuti and her husband Kevin, Dana Reynolds and her wife Amberlee Engle, his grandchildren Jackson Pizzuti and Ava Pizzuti, and his longtime companion, Lorraine Genola.

The family will honor Jim’s wish to have his remains cremated, and at some point in the future a ceremony in his honor will be conducted at the Florida National Cemetery in Bushnell, Florida, where his remains will be interred.

To send flowers to the family or plant a tree in memory of James Reynolds, please visit Tribute Store