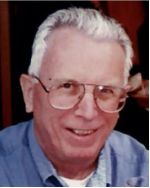 John (Jack) F. Collins Jr. died in The Villages, Florida, on September 27, 2022, at age 85, after a brief illness. Jack was born in Brooklyn, New York, on May 11, 1937, and attended Brooklyn Preparatory High School. He graduated from Mepham High School in Bellmore, New York.

Jack served in the U.S. Navy on the USS Boston and Navy Reserves. He was a Regional Claims Manager for Avis in Garden City, New York. He raised his family in Merrick, New York, and after retirement, moved to The Villages, Florida, in 2003 with his wife of 46 years, Michelle Collins.

Jack enjoyed retirement life in the villages and involved himself in community activities. He adored spending time with his family and especially his grandchildren. While serving on the USS Boston in the Navy, Jack was well-traveled and saw the world. Subsequently, he followed up his love of travel with frequent trips to England and Europe.

Jack was preceded in death by his parents, John F. and Eileen Collins. He is survived by his wife, Michelle Collins; children John Collins, Kathi Furia and her husband, Jerry, and Cliff Rasulo and his wife, Ellen; grandchildren Brandon Furia and his wife Vanessa, Corey Furia, Alyssa Furia, Kevin Rasulo, and Kelly Rasulo; great grand-children Brandon Furia and Lilliana Furia. Jack is also survived by his brothers, William, Patrick, and Robert.

To send flowers to the family or plant a tree in memory of John Collins Jr., please visit Tribute Store
Thursday
6
October