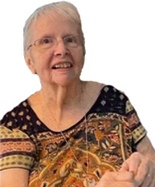 Caroline R. Grabau, 86, passed away peacefully in Jacksonville, Florida on June 26, 2022 after a long illness.  She was born on May 1, 1936 in New York City, New York and raised in New Jersey, but called Florida her home.  Caroline is survived by two sons, Richard and Calvin, both of Jacksonville.  She has (9) grandchildren, Ariel, Luci, and Marley, Ryan and Mylin, Kalynn, Bethany, Matt and Luca, and (9) great grandchildren, a brother, Richard Rountree, and two sisters, Susan King and Margi Rountree.  Caroline was predeceased by her father and mother, Herbert and Frances Rountree, her beloved husband of 61 years, Robert, her youngest son, Robert Jr., a brother, Allen Rountree, and a young sister Bedford Rountree.  She will also be remembered by many, many nieces and nephews who loved her dearly.

Caroline attended college in New York, but left early to work at a camp for children with physical challenges.  There she met the love of her life, Robert, and married in January of 1961.  For the rest of her life, she committed herself to a lifetime of Godly service to others, which she fulfilled until the very end.  She and her husband invited prison inmates to attend church services and would pick them up on Sunday mornings and bring them back on Sunday evenings.  She invited world travelers visiting the United States to stay in her home.  She also cared for the young and troubled, and continued with that even after having been burglarized by the same.  She never spoke a harsh word to anyone in anger and always encouraged others to allow God to guide and comfort them.  Those that knew her most certainly have a special place in their heart where they will hold on to her memory.

At her request, there will be no services other than a private interment of her remains at Highland Memorial Park, Ocala, Florida.  The family is asking that, in lieu of flowers, you consider planting a tree in her name.

To send flowers to the family or plant a tree in memory of Caroline Grabau, please visit Tribute Store

Share Your Memory of
Caroline
Upload Your Memory View All Memories
Be the first to upload a memory!
Share A Memory
Send Flowers