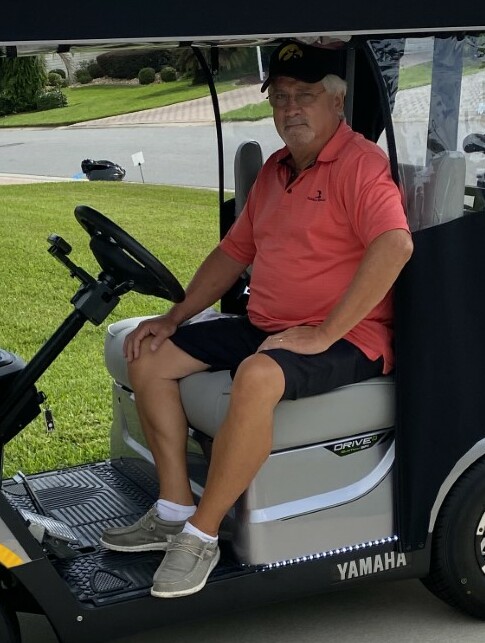 Michael Dee Hall passed away on March 11, 2022 at Ocala Regional Hospital. There will be no formalservice; a private family service will be held at a later date.Mike was born on June 6, 1951 to Cleo and Sarah (Hoenshell) Hall. Mike graduated from English ValleyHigh School in 1969. Mike served proudly in the Army National Guard from 1971 until 1977.Mike worked as a Procurement Director at EPC in Kalona, IA and retired in 2018.Mike was united in marriage to Sheri Ann Gosenberg on July 31, 1998. They lived in West Liberty, IA andmoved to The Villages, FL after their retirement. As a boy, Mike loved to hunt, fish, and trap, and spokeoften of those memories. In his adult years, Mike’s love turned to golf. He enjoyed the Wednesday nightmen’s golf league and his weekend rounds of golf. He made many lasting friendships during his years inWest Liberty. His love of golf continued after he moved to The Villages, and he was especially happywhen he won the “silver ball” after a round of golf with his friends.Above all, Mike had a deep love for his family. He is survived by his wife Sheri; two daughters from aprevious marriage, Hayley (Cory) Yearian ofWilliamsburgIAand Sonya (Danny) Maas of Williamsburg IA; seven grandchildren, including Bryce, Jenna, Jordyn, Colton, and Dakota Yearian, and Leighton andEaston Maas; two stepdaughters Brandi Campbell (Troy) Miller,of Waconia MN and Jeni (James) Laughlinof West Liberty IA; and step-grandchildren Lindsey and Brady Laughlin, and Abbey Campbell.Mike is also survived by siblings Vance (Karen) Hall of Mansfield, TX; Virginia (Steve) Miller of Iowa City,IA; John (Mona) Hall of North English; mother and father-in-law Bill (Margaret) Djerf of Cape Coral FL;sister-in-laws Deb (Greg) Guinn of West Liberty IA and Cindy (Jerry)Fuhrmeister of Iowa City IA;andMike and Sheri’s two best friends, Greg and Tina Campbell.Mike was preceded in death by his parents, brother James, and son-in-law Dan Campbell.

To send flowers to the family or plant a tree in memory of Michael Hall, please visit Tribute Store

Share Your Memory of
Michael
Upload Your Memory View All Memories
Be the first to upload a memory!
Share A Memory
Send Flowers