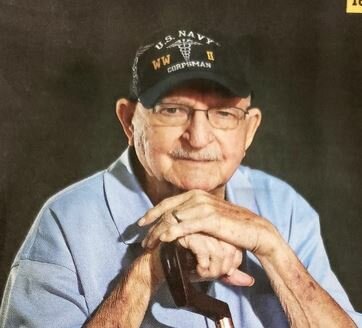 Jack Allen Kress passed away at The Villages Hospital January 28, 2022. He is survived by his wife of 49 years, Maxine Kress. They have resided in The Villages for the past 21 years. He was considered the unofficial Mayor of Villa Berea.

One of the Greatest Generation, he served as a Navy Corpsman during WWII. Jack went on an Honor Flight out of Ocala to Washington, DC in 2011. He was on the Board of the original Villages Honor Flight.

Together with Maxine, he traveled all 50 states and overseas. He enjoyed reading, writing short stories, bingo, German American Club.

To send flowers to the family or plant a tree in memory of Jack Kress, please visit Tribute Store

Share Your Memory of
Jack
Upload Your Memory View All Memories
Be the first to upload a memory!
Share A Memory
Send Flowers