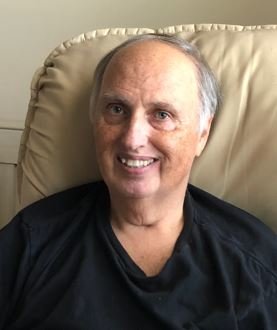 Passes away peacefully in the early hours of November 16 at the Villages Hospice House.  “Jim” to his friends AKA “Vinni” to his German relatives

Jim was born and grew up in Pawtucket RI, graduated West Senior High School (Class of 1968) attained a Bachelors Degree from University of Rhode Island and served in the Armed Services, Dept of the Army as Paratrooper and Transportation Specialist while stationed in Berlin Germany.  Jim started in 1978 a Federal Government Career as an Intern Accountant auditing automated financial systems.  He met his wife (Donna) while attending a training class in Washington DC and in 1980 they were married.  Both continued working for the Federal Government – Jim’s 35 year career was devoted to Financial Management for the Department of the Navy, primarily at the Naval Seas Systems Command.  He received several awards for his dedication and due diligence while his career continued until 2010 retirement.

Jim had wonderful relationship with their son (Christopher), they attended several opening days of baseball together and took father son trips to football games for Chris’ birthday.  Jim enjoyed being a little league baseball coach and manager, Cub Scout leader (Akela) and actively participated in the Pinewood Derby & Rain Gutter Regattas for several years.  Jim enjoyed fresh & saltwater fishing, afternoon cribbage battles, playing with our dogs and driving around in the car of his dreams – his red corvette!

In 2013, Jim and Donna moved to The Villages enjoying their retirement.  The two neighborhoods he lived at (Village of Gilchrist and Village of Osceola Hills) were full of wonderful neighbors that he enjoyed going to dinner, card play, golf, evening out to the Square, daytrips to explore “Outside the Bubble” and road trips to Houston Texas to visit David (Jim’s brother-in-law) and taking Caribbean Cruises with family & friends!

Our family was blessed with the additions of Heather (Chris’ wife) in 2013 and DiDi (Jim’s daughter) from Germany with a reuniting in 2016 and has always remained close with Jenny (Jim’s cousin) over her lifetime.

Jim continued to talk about the surprise 70th Birthday we had last December, and all of the friends & family that were able to join in the fun as Petrina and The Villages Blues Brothers provided entertainment, such a wonderful day.  His medical condition deteriorated, this past year he was cared for by the loving staff at Harbor Chase Assisted Living – they have said he always greeted them with a big smile and thanked them for their care.  In celebration of his life, please join me in spirit; pray for his everlasting peace, he will be missed.

To send flowers to the family or plant a tree in memory of James Hill, please visit Tribute Store