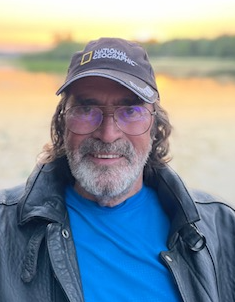 Marion Douglas Joiner was born on April 25, 1947, to Lucille and Fleetwood Joiner.

Doug blessed all who know him with years of light and magic. He passed away peacefully in the arms of loved ones on Wednesday, November 9th, at Estelle's Hospice House in Ocala.

Doug lived most of his amazing life in Ocala. He graduated from Ocala High School, class of 1965. He completed a degree in Psychology and English, as a member of the charter class of University of West Florida. He later obtained a Master’s Degree in Guidance and Counseling from Valdosta State University.

He began his career as a guidance counselor at Reddick and Howard Middle Schools. The impact he had on the lives of his students was nothing short of extraordinary. Doug pioneered the advancement of technology in Marion County Schools. He spearheaded the creation and improvement of the district's data network.  He was instrumental in planning and creating the telephone network in every classroom. He managed the best television production facility in the state. This included point-to-point communications for all schools via towers (which he had no problems personally climbing). Doug was responsible for mobile TV production, which included a microwave satellite on top of the production truck and satellite point-to-point communication between the schools and the district. Doug led the team that wrote the grant for E-Rate.  This funded the expansion of technology, computers in every classroom and school data centers.  Doug retired from the school system in 2002, and went on to enjoy over twenty years with family and friends. His spirit will forever be felt within the home he grew up in Ocala, in the Keys and on Brown's Island in Tomahawk, Wisconsin. If you were lucky enough to know him, you know his spirit will be felt all around you. He was magic like that.

Doug earned several nicknames in his lifetime. Wrangling a water moccasin away from swimmers at Salt

Springs earned him the moniker of "Crocodile Dougie" He his years as a camp counselor, fire eater and

Master scuba instructor lead to the name "Bubbles." If you want to know how he became known as "The Key Man". Ask someone to tell you that story.  One of his many adventures led him to be in the right place at the right time to be an understudy in Sea Hunt and The Six Million Dollar Man. Doug's family includes his big brother, Fleetwood B. Joiner (Jessica), his soulmate/wife and love of his life, Nancy Haynes, his daughters, Ashlynn, Amanda, and Callie, his pride and joys….. his grandchildren, Dylan, Luke, Jayden, Addison and Elin. If you knew Doug, you experienced magic, light and adventure.

Doug loved flowers but would much prefer a donation in his name to the Marion County Public Education Foundation or Hospice of Marion County.

To send flowers to the family or plant a tree in memory of Marion Joiner, please visit Tribute Store
Sunday
20
November