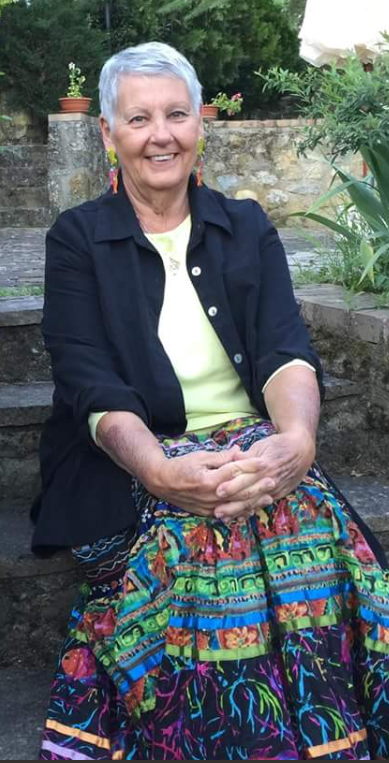 Donna Witherspoon Kelly, a long-time resident of The Villages, Florida died peacefully in her home, surrounded by her children, on Sunday, November 6, 2022. She was born on January 15, 1937, to the late Earl Witherspoon and Bernice Mansfield.

Donna (or “Mimi” to many) is survived by her loving children, Meri Lynn (spouse Jim Korton) of Belleview, Florida, Teri Kelly Graves (spouse Alan) of Middleburg, Virginia, and Kevin Neal Kelly (spouse Samantha) of Ashburn, Virginia, along with her nine adoring grandchildren (Chad Logan, AJ Parmentier, Noah Leindecker, Gabrielle, Griffin, Tucker, and Cooper Graves, Summer and Copelyn Kelly, great grandchildren (Lane, Libbey, Laken, Wesley, and Nellie), and best furry friend of 15 years, Cosmo (adopted by Donna’s closest friend, Bev Garlipp). She is also survived by her two loving sisters-in-law, Judy Bland and Rita Stevenson, along with many cherished nieces and nephews. She was preceded in death by her brother and sister (Bob Witherspoon and Lynda Witherspoon Finch), and her beloved grandson, Wesley Parmentier.

Donna grew up near Kansas City, Missouri. During the winter months, she enjoyed neighborhood sleigh rides, bonfires and warm hot chocolate at the end of the day. She loved going on picnics with her mom, and to the local zoo with her Uncle Claude and his family. Summer months were spent catching lightening bugs, playing red rover, and hide-in-seek in her family’s big front yard. She loved theatre, and was involved in school and church plays. She adored her father, and often said that the scripture she loved most was 1 Corinthians 13, which defines love as patient, kind, humble and gentle, because it described her experience with her father. When she was a teenager, her family moved to Lexington, Kentucky. She loved going to school dances, basketball games, and roller-skating on Friday nights. She graduated from Lafayette High School in 1955. One of her favorite classes was typewriting. She was very competitive and was proud at the speed at which she typed on her Royal Typewriter. She also discovered her love for American and world history, as well as an affinity for reading, especially historical fiction. After high school, she went to work at the University of Kentucky, and it was there that Donna married an engineering student by the name of Carl Kelly from Leitchfield, Kentucky, and started her own family.

Donna, her husband, Carl, and their two daughters, Meri Lynn and Teri, moved to Albuquerque, NM, where their son, Kevin was born. From there, they moved to Brunswick, GA, where she loved spending time with friends and family at Jekyll Island. Friday night was shrimp night and Donna loved to tell how she was able to purchase the fresh seafood right off the boat for .25/lb. She enjoyed playing bridge with their friends from church.  From there, they moved to Mountain View, California, for Carl’s job, but quickly decided that California in the 60s was not where she wanted to raise her family, so they packed up and moved to Greenville, Texas where her husband began working on his PhD. In Greenville, Donna became active in the Newcomers Club, played golf and bridge, and attended the Johnson Street Church of Christ where she formed lifelong friendships.  After her husband finished his PhD, they packed up the kids and moved to Fayetteville, Tennessee.  The town was small, southern and extremely friendly and they became active members of the Washington Street Church of Christ. While living in Fayetteville, Donna went back to school to get a degree in nursing.  As a child, Donna admired the visiting nurses who came to her school. She dreamed that one day she might be just like them, wearing white hose, a sharp blue cape, and carrying a medical bag filled with important medical supplies. Although that dream had not been forgotten, it had been put on the back burner when she got married and had children.

Soon after earning her degree, Donna’s husband became interested in a new start-up company in Reston, Virginia, so once again, Donna packed up the house and family, and moved north. Donna’s first job was working nights in a nursing home in Leesburg, VA.  She loved the patients and staff there and realized her own passion, apart from being a wife and mom. After divorcing, Donna worked several temporary jobs before being hired by Georgetown Hospital.  Although she was hired to be the clinic nurse, she retired at 65 as Coordinator of Operations for Lombardi Cancer Center. At her retirement celebration Dr. Ed Gelmann who was Director of the Cancer Center said “Donna brought sanity and stability to Lombardi. Dan Hayes, MD was quoted as saying “a generation of medical oncology fellows owe Donna a great debt of gratitude”. She loved the diversity of a teaching hospital and was exposed to famous people like Madeline Albright, George Will, and Sandra Day O’Conner. She traveled with a medical team from Vanderbilt to Honduras. She Traveled to England and to Italy, purchased her own home and car, and formed lifelong friendships with like-minded people who she loved and respected.

Donna, fiercely independent and exceptionally confident at 65, decided to move to the Villages, Florida. She bought a house in the Village of Glenbrook, took up golfing and bowling, joined the beach club, the Mid-Atlantic Club and volunteered at the local Cancer Center. She became an Episcopalian and Vestry member at Holy Trinity Church. She enjoyed Friday night dinners with friends, breakfasts with her adopted Michigan group, weekly women’s prayer and meditation meetings and the relationship she had with her God, spirit team, and angels. More than anything, she adored her children and grandchildren. She was so proud of each of them, delighted in their phone calls and visits, and loved hearing all the details that colored their lives. Their victories and burdens were shared by her and she was fiercely loyal to those in her circle. She was an example of strength and courage, always, but especially in her final hours.

Donna was a dynamic force to be reckoned with. She was so very loved and will be cherished and honored forever by family, friends, colleagues, and neighbors.

A Celebration of Donna's life will be held on Sunday, November 13, 2022 at The Laurel Manor Recreation Center beginning at 4:00pm.

Share Your Memory of
Donna
Upload Your Memory View All Memories
Be the first to upload a memory!
Share A Memory