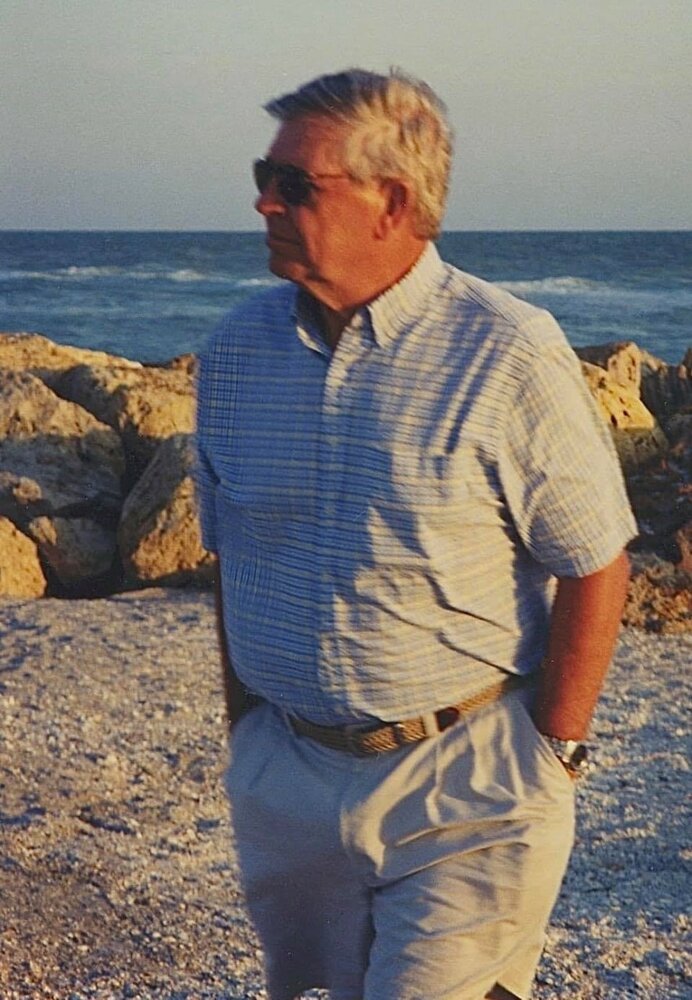 Neil R. Keegstra, 88, of The Villages, Florida, passed away peacefully on September 26, 2022 after a long illness. He was predeceased just 39 days earlier by his beloved wife of 39 years, Loretta Koenig Keegstra. As in life, it would have been unusual for them to be apart for long.

Neil was born in December 1933 in Englewood, New Jersey, the only child of Cornelius and Florence Keegstra. He had a wonderful childhood growing up in Fair Lawn, New Jersey. He liked to recount interesting tales of what it was like stateside as a kid during WWII, such as seeing defensive military troops near home and required blackouts during vacations at the Jersey Shore. In his teenage years he played on the football team at Fair Lawn High School.

In 1953 Neil married his first wife Arthadel “Joan” (nee Paton). They had four children: Debra, Neil, Scott and Steven. In 1959 they built a home in Wayne, New Jersey where the kids grew up. Neil worked very hard to support his young family and for years even worked a second job as a ‘milkman’ in the overnight hours! Neil was a wonderful Dad and inspired many great memories. He was a Boy Scout Leader, shared the joys of the Jersey Shore on trips to Long Beach Island, and taught everyone how to ski. Family ski trips to Killington, Vermont were particularly memorable. In addition to skiing, he enjoyed visiting great spots to fish for trout. Although he never went to college, he was extremely proud that all four of his children graduated!

Neil had a long career in the telecommunications industry. He started at Western Electric then joined New Jersey Bell (which eventually became Verizon). He held many positions in the field and later became a manager. Before the internet and cell phones, landline phones were the critical mode of communications and the employees of ‘Ma Bell’ were charged with keeping the lines working in all manner of severe weather or disaster. Neil was a true ‘telephone man’ and always took his responsibilities very seriously. In an industry that required a lot of structure and discipline, Neil won the respect of his colleagues and people he managed. He loved working with people and had a reputation for treating people fairly.

In 1982 Neil married his second wife Loretta Koenig Bischof and welcomed her three children Steven, Charles and Christine into the fold. Neil and Loretta enjoyed working together on beautifully restoring their first home in Parsippany, New Jersey prior to their retirement.

They moved to Florida in 1988 and first settled in Sarasota on Siesta Key. They embraced the warm climate and proximity to the water. They loved taking their boat out on the inland waterway and enjoying the beautiful beaches. This setting was particularly wonderful for visits from kids and grandkids. Neil took up golf and volunteered with his condo board and on charity golf tournaments. He took up a new hobby working with stained glass and created many beautiful pieces cherished by the recipients.

Later the couple moved north to the Villages, Florida where purchasing a home in a newly constructed neighborhood was a perfect opportunity for developing a wonderful new circle of friends. Neil continued to enjoy the sport of golf in this ‘golfer’s paradise’ and loved having his own personal cart in the garage! He found contentment in the lovely homes he and Loretta shared, always filled with love, laughter, great food and hospitality. They enjoyed traveling and often returned to a favorite spot in Maine, Pemaquid Point.

Neil will be remembered as a kind, gracious, loving and compassionate man who was always, and truly, a gentleman.

To send flowers to the family or plant a tree in memory of Neil Keegstra, please visit Tribute Store
Saturday
12
November

Share Your Memory of
Neil
Upload Your Memory View All Memories
Be the first to upload a memory!
Share A Memory
Send Flowers