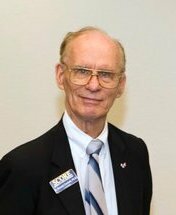 Ron Corbett passed away in his home in Ocala, Florida, surrounded with the love of his brother Ken and his wife of 50 years Sydney. He fought the good fight, he finished the race, he kept the faith—2 Timothy 4:7-8 sums up Dr. Ron’s life. God, Country, Family were the three priorities in his life.

An enthusiastic entrepreneur, Ron had several businesses over the years. In Panama, he had American Supply for 20+ years, offering an unusual combination of restaurant, billiard, wedding, and cake decorating supplies. The motto was Si Hay—Yes, we have it. When we “retired” to the United States in 1999, he opened Yes Solutions, an ink toner/cartridge and printing business.

His motto for life was “Yes, it can be done.” He loved a challenge and loved helping others learn how to meet their challenges. He volunteered with SCORE (Service Corps of Retired Executives) for many years in Ocala, sharing his business acumen and expertise with those who were opening their own new businesses or who needed guidance to help their businesses prosper.

He was a proud Air Force Veteran, having served in Viet Nam as an air-sea rescue paramedic and earning a battlefield commission. He had been a POW until he escaped and helped several others escape also. He was stationed in Panama when he left the Service after 9 years. He stayed in Panama because he met Sydney, who was a teacher in the local high school. They married in 1972 and stayed there until the Carter-Torrijos Treaty closed the American schools and turned the Canal over to Panama in 1999.

While in Panama, Ron served as a Scout leader for the Sea Scouts. He loved sailing and enjoyed sharing his love and ability with the youth. In addition to a love for sailing, he also loved flying. He helped run a small flying school for those seeking their private pilot’s license. He was also the “Dad” Advisor for the DeMolay, leading young men to understand responsibility and morally right living.

Also while in Panama, he served on the Presidential Council of Economics as an advisor on international commerce to Presidents Lakas and Royo. This was quite an honor for a “gringo,” a testament to his business acumen.

When in his late-50s, he decided he wanted to have a PhD, “just for fun.” He achieved that goal in 1996, after applying for an extension due to surgery for a brain tumor. He enjoyed being called “Dr. Ron” or “the Doc” by his friends and colleagues.

Those wishing to honor Dr. R. Ronald Corbett’s memory are encouraged to donate to organizations that help Veterans.

To send flowers to the family or plant a tree in memory of Ron Corbett, please visit Tribute Store

Share Your Memory of
Ron
Upload Your Memory View All Memories
Be the first to upload a memory!
Share A Memory
Send Flowers