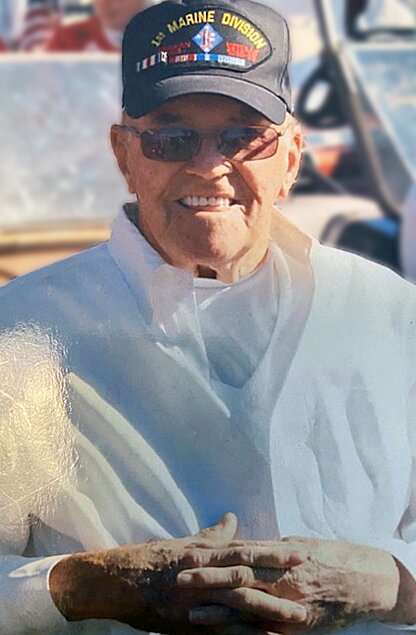 George Dustan Myron of Ocala Florida passed away at his home on Friday, May 6, 2022.

He is survived by his wife of 69 years, Nancy Walsh Myron, by his daughter Barbara Stolz (husband Raymond Stolz) of Pennsylvania, by his daughter, Mari Beth Westlund (husband David Westlund) of Texas, and by his grandchildren, Andrew Baillie of New Jersey, Kelli Westlund and Katie Westlund both of Texas. He is predeceased by his parents George and Agnes Myron, his brother, Kenneth Myron, his daughter, Patricia Myron, his son, Stephen Myron and his grandson, Christopher Baillie.

George was born in Orange, New Jersey, and lived most of his life in New Jersey until he retired to Ocala, Florida in 1997. He holds a Master’s Degree from William Patterson University.

He proudly served in the United States Marine Corp during the Korean War and he was honored with the Silver Star. As a recognized veteran he recently had the privilege of going on the Honor Flight trip to the nation’s capital.

George was an active member in The Ocala Palms community he especially enjoyed golf and had great love for all of his golf buddies.

A memorial service will be held during the church service in the Ocala Palms Clubhouse on Sunday, June 12, 2022, at 10:00 a.m. A committal service with military honors will be held at Florida National Cemetery, Bushnell, FL at 9:00, Monday, June 13, 2022.

For those wishing to memorialize George please donate to the Cystic Fibrosis Foundation, the Veterans Administration or American Cancer Society.

To send flowers to the family or plant a tree in memory of George Myron, please visit Tribute Store