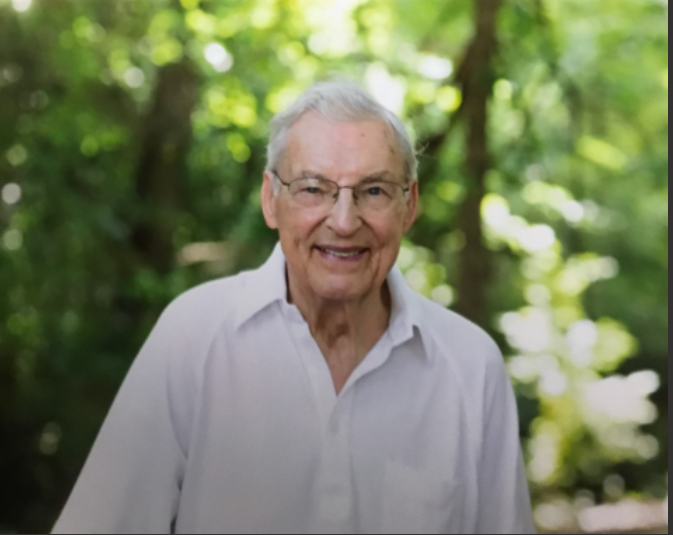 A Memorial Mass will be held on May 23 at St. Mark the Evangelist in Summerfield, Florida. Interment will be private.

Ralph was born to Phillip and Stefana Meyers on February 11, 1927, a birthday he would later share with his grandson RJ. Ralph grew up in the Polish community in Cleveland during the Great Depression. His discipline and hard work allowed him to overcoming the sparse upbringing by becoming the first in his family to attend college, graduating from National College with a DC in Chiropractic and DO in Osteopathic medicine. He met his dear wife Joann while square dancing after graduation in Cleveland, Ohio. They continued to dance for many years. You could count on Ralph for a good polka and he always requested New York, New York so he could sing and dance with you. Ralph and Joann set up Meyers Chiropractic Clinic in Medina, Ohio where he worked serving the community until his retirement. Ralph and Joann moved to Seville, then St. Louis before settling in Florida and joined many of the clubs and activities including a great bit of golf. Always a traveler, Ralph took his families around the world with memorable trips to Canada, Mexico, Europe and many US destinations. He would slow down the entire group reading each and every historical plaque and searching for recommended restaurant. He loved to tell travel stories.

Ralph loved hiking and outdoors and enjoyed his youth with camping days as a Boy Scout and Sea Scout—stories he enjoyed remembering. He loved the water and briefly sailed until he sank his boat in Hinckley Lake. He drove the manual transmission RVing to explore the state parks and beaches of the east coast. At some point, all of the grandchildren and great grandchildren fished with him. We are still unsure if they ever caught anything or simply enjoyed the outdoors together.

Healthy food and living was an essential aspect of Ralph’s life. He was very active and until his stroke, was still walking 3 miles a day. He always was working in the yard and garden. Ralph obsessed over growing his own vegetables (especially tomatoes) and at one time planting an acre-sized garden out at his farm which was successful until all the pigs ate his plants. He loved his sauerkraut, stuffed peppers, grilled red-snapper and bowlfuls of fruits or vegetables. Almost always seen with a cup of coffee in his hand, Ralph used to wake up his boys grinding his own blend of beans in the morning. He had a weakness for ice cream and wavey potato chips.

RJ playing football for the Southlake Youth Dragons. He loved a good book and later loved audio books, especially true stories which he would hold great discussions. He kept his mind active and even into his 90’s he was a successful day-trader and suffered over the highs and lows of the stock market.

Ralph provided a wonderful life for his family. Ralph set extraordinary standards for himself and his children. He only expected high achievements and instilled a fierce work ethic into his children. Ralph was a self-taught plumber, carpenter, painter and landscaper. By spotlight late into the evening, he was painting, wall-papering or repairing his home or rental properties. He did the work and taught his children these skills.

Ralph was a devout Catholic and was fortunate to receive communion the week of his passing and the sacrament of the Last Rites. He loved the Catholic Mass and the joy it brought him. He was waiting to see Jesus and is now watching over all of us from heaven.

Ralph will be remembered for having the bluest of blue eyes. We will see those same blue eyes every day in his children and grandchildren

Ralph’s dedication and his love for Joann is a model to follow. Ralph brought Joann flowers nearly every week of their marriage. For the past two years, Ralph fought to overcome the obstacles resulting from a stroke and was supported by his faithful caregiver Joann. Ralph will dearly be missed and we will always celebrate the fullness of his life and all the great memories. We are grateful that he shared his life and his love with us. We will never forget it.

To send flowers to the family or plant a tree in memory of Ralph Meyers, please visit Tribute Store