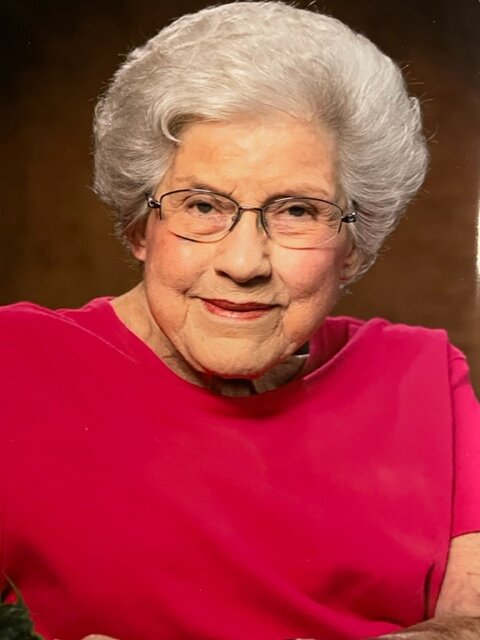 Mary Florence Fisher Kirk was born on October 5, 1928, in Morristown TN and died February 11, 2022, in Ocala FL. She was the daughter of Ella Russell Fisher, an elementary school teacher and Edwin Barto Fisher, President of Fisher Oil Company. Biddie, (the nick name her sister gave her) Mom, Grandmother, Geegee and Mama Kirk (to her children’s friends) grew up in Morristown with her four siblings and a large extended family with whom she was always close.  She met Jim Kirk in high school and thus began a friendship, courtship and then marriage at First Presbyterian Church of Morristown that lasted until his death in 2015. She was a proud graduate of the University of Tennessee where she received a BA degree in education and was member of Delta Gamma sorority, maintaining membership her entire life.  Her love of travel started in college when she and three friends drove in her roadster to a sorority convention in Banff, Canada planning and carrying out a six-week adventure in the US and Canada on their way to and from the convention. After graduation her first job was teaching in a one room school complete with an outhouse, in a part of the county she was unaware of previously and for her the experience was life changing. When Jim returned from active duty in the Army they married and moved to Tallahassee FL where he attended Florida State University and Biddie continued teaching in Tallahassee and nearby Quincy where they lived for two years. They moved to Ocala in 1953 where they quickly became a part of the growing city as they joined civic groups and First Presbyterian Church. Biddie often said that her faith tradition enabled her to expand her world view as a progressive woman and to give of herself to others in an authentic way which was thoughtful and well informed.

After a few years in the classroom Biddie put aside her formal teaching career and became a “professional volunteer” using her sharp intellect and crisp organizational skills in her service to the community as a dedicated volunteer, board member, and president of many organizations. She was recognized for her leadership on behalf of the public school system and was a “team parent” for the numerous athletic activities her children were a part of. Among others she belonged to Woman’s Club and Ocala chapter of Daughters of the American Revolution. She coordinated yearly March of Dimes and UNICEF events, was active in Church Women United where she facilitated ministry with migrant communities and delivered Meals on Wheels. As a “senior citizen” herself she was pleased to be a board member of Marion Senior Services for over twenty years who recognized her with a Volunteer Appreciation Award. In her church she served in numerous capacities including Elder, Chancel Choir Member, Pastor Search Committee Member, Presbyterian Women President (from whom she received an Honorary Life Membership), Sunday School Teacher, Women’s Circle Leader, Wedding Director and Wednesday Supper Host. She coordinated countless receptions and gatherings including church anniversary celebrations and presbytery meetings. Women’s retreats were some of her favorite times especially those at the Montreat NC Conference Center.

Biddie was a lifelong learner, taking college courses to keep her teaching certificate current, along with other topics that were of interest. She was generous to her and her husband’s alma maters and those of her children as well. She and Jim established scholarships at the College of Central Florida and Florida State University so that generations of students benefit from their commitment to education. She was a sports fan, especially of Tennessee football. Support for the arts was important for Biddie and she was a patron of the Ocala Civic Theater with whom she took many theater trips to New York City and The Appleton Museum of Art in Ocala. She enjoyed the Ocala Symphony Orchestra, and the Broadway show seasons at the Bob Carr Performing Arts Center in Orlando. She was committed to historic preservation and was a supporter of the Rose Center Council for the Arts in Morristown, housed in the building where she and several generations of her family attended elementary school. She and Jim purchased the downtown Ocala Marion Theater, donating it to the city so it could be used in ways that fit the needs of the changing community. She appreciated the historic district of Ocala where they made their family home for over sixty years.

Biddie loved Florida, especially the beach, but her heart was always in the east Tennessee mountains. She traveled the world from Europe to the Middle East to South America and took many trips from one side of Canada to the other. Visits to Scotland connected her with the Douglas Clan, to whom she was related through her mother’s side of the family. She traveled often with her daughter, and also with other family and friends. She was an avid amateur photographer and documented her journeys with picture albums of each trip. From 1956 until 2021 she sent photo Christmas cards of the family and in the early years she included letters in rhyme describing their activities. Eventually her beloved grandchildren and great grandchildren who brought her such joy became the focus of the cards.  Anniversaries were big affairs and she often celebrated birthdays at Disney World or on a Disney Cruise Ship. Her 93rd birthday party in October was a “drive through” due to Covid protocols and she said had she known what fun it was she would have had one before. She was a wonderful hostess of countless occasions with family and friends in her home, and foreign exchange students were also welcomed over the years.

She was supportive of Jim’s endeavors as he was of hers. Together they made special friendships nurtured with various groups and in gatherings including a monthly supper club that lasted for decades. Biddie was a devoted friend and cherished her relationships, many that spanned miles and years, and the ones formed through her associations including church, bridge club, lunch group and neighborhood.

Her family is appreciative of the Windsor of Ocala community where Biddie lived the past four years; and in her final days Visiting Angels and Cates House (Hospice of Marion County) who enabled her to have the best quality of life possible. She was active until the end, and we are grateful for her legacy of faith, family and service to others. She was looking forward to traveling again, and we are confident she has crossed a distant ocean on the greatest adventure of all.

Along with her husband, she was predeceased by her parents, stepmother Beulah Kilgore Fisher; siblings Edwin Fisher, Russell Fisher, Helen Slabbekorn, Frank Fisher and their spouses; and her sisters in law Carolyn Pack, Middie Crosby, Billie Cockrum and their spouses. She is survived by her daughter Debbie Kirk of Raleigh, NC; sons Russell Kirk (Monika); John Kirk (Rhonda); and Richard Kirk all of Ocala; grandchildren Tyler Williams (Bridgit) of Ocala;  Matt Kirk (Emily) of Indianapolis IN; Sarah Kirk of Ocala; Andrew Kirk (Michelle) of Ocala; Jim Kirk of Nashville TN;  step grandchildren Brandon Raczkowski (Dallas Ripley); and Brent Raczkowski (Nicole) all of Ocala; great grandchildren Nora and Audrey Williams of Ocala; Easton, Preston and Kinsley Kirk of Indianapolis; Layton and Oliver Kirk of Ocala; her cherished nieces and nephews along with other extended family.

To send flowers to the family or plant a tree in memory of Mary Kirk, please visit Tribute Store

Share Your Memory of
Mary
Upload Your Memory View All Memories
Be the first to upload a memory!
Share A Memory
Send Flowers