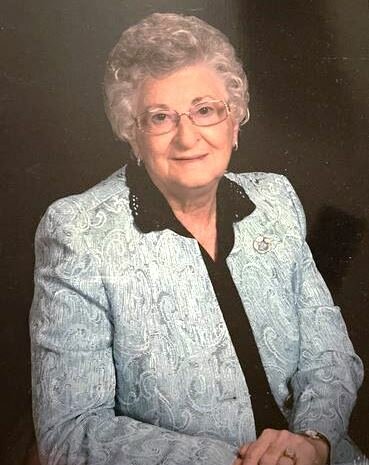 Frances Earline Gambrell Gilbert passed over to glory peacefully on February 19, 2022.  She was 91 years old.

Known as Earline to those who knew her. She was the daughter of William Earl Gambrell and Wilma Esther (Casteel) Gambrell. She was born in Old Hickory Tennessee on August 17, 1930.

She was married to Jack Gilbert for 62 years before his passing in 2011.  She is survived by two daughters Jackie (Michael) Gilbert, and Donna (Danny) Boyett as well as her grandchildren Trae and Ross Locklear and Jeremy (Ashley) Boyett and one great granddaughter Taylor Boyett.  She was preceded in death by her parents and all of her siblings.  She has one living brother-in-law Cletus Stewart as well as many cousins, nieces and nephews.

Earline was a Sumter County resident for over 60 years.  She was a member of the First Baptist Church of Wildwood where she taught Sunday School for many years and was a member of the WMU.  She worked for the Sumter County School Board as a teacher’s aide.  Jack & Earline bought a small place in the Hiawassee Trailer Park in Bryson City North Carolina where they vacationed every summer in North Carolina.  They had many Florida friends and family who also had places in the same park and nearby.  They loved to travel with friends and family staying in someone’s cabin or camping.

Earline was a great seamstress and made clothes for herself and both girls.  She was an avid reader and would start and finish a book in the same day.  She loved to write poems, play games, do crossword puzzles, word search and Cryptograms.  She even created the Christmas game the family plays every year.  She was a self-proclaimed Chocoholic, she loved anything chocolate, you never asked if she wanted chocolate or vanilla, we all knew she wanted Chocolate.

She will be greatly missed and even more greatly remembered.  Her family rejoices that after a very full life she is now in the presence of her God and Savior and is free from all pain and sorrow.

In lieu of flowers donations can be made in memory of Earline to:

The Kidney Foundation or

To send flowers to the family or plant a tree in memory of Frances Gilbert, please visit Tribute Store
Friday
25
February

Share Your Memory of
Frances
Upload Your Memory View All Memories
Be the first to upload a memory!
Share A Memory
Send Flowers