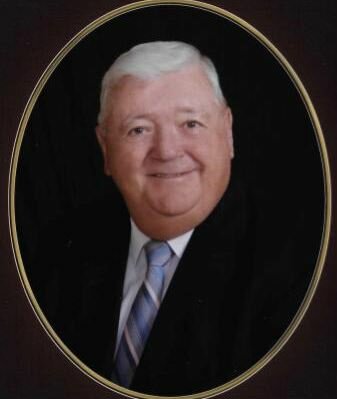 There will be a private viewing for immediate family only at Hiers-Baxley Funeral Home, Wedgewood Lane in the Villages, followed by funeral services to be held at 10AM, Wednesday, February 9, 2022, at St Mark the Evangelist Catholic Church, Summerfield, FL.  All are welcome to attend the funeral services.

James was born in Woonsocket, RI to the parents of Raymond and Marguerite (Gerlache) McGee on July 17, 1939.  He was married to Mary (Lamothe) on August 1, 1964 in Cumberland, RI.  He was a graduate of Mount Saint Charles Academy (Woonsocket, RI), held a Bachelor’s Degree from Providence College (Providence, RI) and Master’s of Education from the Commonwealth of Massachusetts State College, College at Worcester.

He retired in 1998 after teaching 38 years, mostly in the Town of Foxboro, Massachusetts.  Mr. McGee, as he was known to his students, loved being a teacher, both in the classroom and outside of it.  He was always willing to share his educational and life experiences, with anyone and everyone who would listen, often through storytelling.  Over the years, and especially after retirement, he loved to hear from students he had had through the years, learn about their lives, and share with them as well.  He always prided himself on how often students eventually became ‘friends’ years after graduation.

He was a designated ‘Lifetime Member’ of the National Education Association for his dedication to the association, the teaching profession and his students.

Jim, as he was mostly commonly known, served as a member of the Rhode Island National Guard 1963-1968.

He was preceded in death by his parents, sister Marie Jacqueline and brother Ronald.

The family would like to thank everyone for their love, support and prayers during this difficult time.

To send flowers to the family or plant a tree in memory of James McGee, please visit Tribute Store
Wednesday
9
February