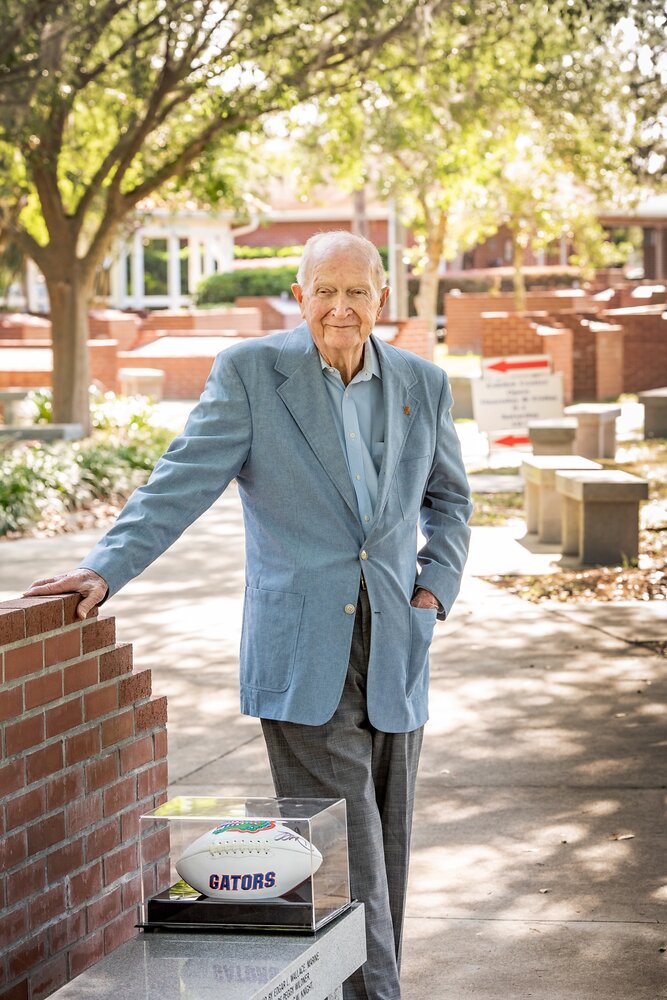 Douglas Hatton Oswald died on December 6, 2021. He was born on November 13, 1923, in Marianna, Florida, to Douglas Hartwell and Ruby Estelle Oswald. He was predeceased by his wife of 67 years, Virginia Bullard Oswald. He is survived by three children, Buddy (Lee), Ginger, and Lynne; three grandchildren, Deanna, Maylynn, and John Douglas; and two great grandchildren, Camellia and Citra.

Doug had a deep and abiding faith rooted in the United Methodist value of service. Throughout his long life, he was dedicated to the development and improvement of his family, his community and his nation. This service is exemplified by Doug’s devotion to Ginger, especially during his later years; and his military service as a young man during World War II. After voluntarily renouncing his deferment, he was inducted into the US Army in 1943. While serving on the front lines with the 290th Engineer Combat Battalion near Strasburg, France, Doug was wounded during a night patrol. Following the war, Doug returned to the University of Florida, earning a letter in football and graduating in 1949 with a degree in agriculture.

In 1953, Doug moved to Ocala with his young family to become the first full time agricultural lender in Florida. For the rest of his life, Doug was devoted to his family, friends, and the people of Ocala and Marion County. The core of his banking philosophy was that banks should serve the community, improving everyone’s standard of living by facilitating the flow of commerce. This philosophy guided both his lending practices as president of SunTrust Bank of Marion County and his leadership of numerous professional and economic organizations. The nonprofit organizations of which he was an active member are too numerous to list, but are highlighted by his membership in the Kiwanis Club of Ocala for more than 60 years, serving as president in 1961; and his service as the first chairman of the Appleton Museum of Art trustees, during which he oversaw the construction of the museum. Although he preferred to exercise his political influence in the background, he served as Mayor of Ocala in 1976-1977, after being elected without opposition. Even Doug’s recreational activities resulted in a better community. An avid golfer, he served for many years as chairman of the Ocala Municipal Golf Course advisory board, supervising many course modifications.

Doug loved the outdoors; hunting and fishing provided welcome respite from the world of commerce. He roamed rural Marion County in pursuit of bobwhite quail; and continually looked forward to his annual trip to Dove Creek, Texas, with the Eight Pointers. Bream fishing trips provided the menu for fish fries with family and friends.

On Saturday, December 18, 2021, a service celebrating his life will be held at the First United Methodist Church on Silver Springs Boulevard, at 11:00 a.m., followed by a reception in the Family Life Center. For those unable to attend, the service may be viewed live, or for 90 days thereafter, by following this link: https://client.tribucast.com/tcid/7503713795. For those wishing to make memorial gifts, the family requests they be made to the First United Methodist Church of Ocala, 1126 E. Silver Springs Blvd, Ocala, FL 34470; or the Camp Kiwanis Foundation, P.O. Box 682, Ocala, FL 34478-0682.

To send flowers to the family or plant a tree in memory of Douglas Oswald, please visit Tribute Store

Share Your Memory of
Douglas
Upload Your Memory View All Memories
Be the first to upload a memory!
Share A Memory
Send Flowers