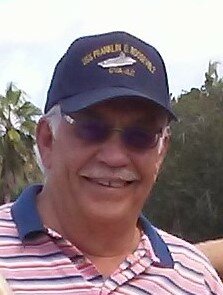 Ed Petrosky, 75, departed this life on Wed October 13 at his home in The Villages, Fl. after a month-long battle with cancer. His transition was eased by his wife, Dottie, and sister-in-law, Brenda Fischer.

Ed was born on June 22, 1946 in Pittsburgh, Pa and grew up in Munhall, Pa, graduating from Munhall HS in 1964 and later earning a BS from the University of Pittsburgh. The bulk of his professional life was spent in Engineering, Purchasing, and Quality Control in the Naval Nuclear and Steel Industries until his retirement in 2008.

Ed was a proud Navy veteran having served as the Captain’s yeoman aboard the USS Franklin D. Roosevelt in the late 1960’s. He was active in the FDR Reunion Group and enjoyed spending time with fellow shipmates at their yearly conventions.

He and Dottie met on a blind date in 1979 and were married in 1982. They moved to The Villages on Christmas Eve, 2019 after spending the prior thirty years in Volant, Pa.

Always quick with a smile, Ed had a witty sense of humor and a joke or story for any occasion. He enjoyed fishing and wildlife. There was nothing he couldn’t build and he and Dottie proudly doubled the size of their Volant house from excavation to finish carpentry and everything in between. His tools found a new home in his Florida workshop and the pair again got creative and quickly redid their kitchen, doing all the work themselves. He was very fond of his Amish friends in Volant and spent nearly every summer with them on fising trips to Lake Erie or the Georgian Bay in Canada.

Ed is survived by his loving wife Dottie, Brothers Chuck (Carol) and Ray in Pennsylvania as well as in-laws Ginger Riley in Chesapeake, Va, Brenda Fischer and Ruthann Ranker, both of Kingsport, Tn. He also leaves 14 nieces and nephews and their families. He was preceded in death by his parents and brothers-in-law Dick Riley and Fr Emil Fischer OFM Cap.

A simple celebration of Ed’s life will take place on Wed. Oct 20 at 3:30pm at the Hiers-Baxley Life Event Center 3975 Wedgewood Ln The Villages, Fl with interment at a later date in the Florida National Cemetery in Bushnell, Fl.

Ever appreciative of the sacrifices made by the American Military and First Responders, in lieu of flowers he asked that donations be made to the Tunnel To Towers Foundation in his memory.

To send flowers to the family or plant a tree in memory of Edward Petrosky, please visit Tribute Store