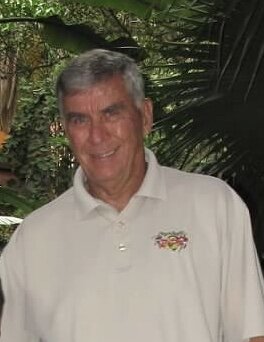 John Nee, 83, of Hacienda North in the Villages, Florida, passed away on Friday, September 10th, 2021. John was born on May 22, 1938 in the Bronx, New York, and grew up in Flushing. He attended St. Andrew Avellino Grammar School, and Mount St. Michael’s High School. He married Janice Kane on October 6, 1962, and they remained married until her death in September, 2010. He served in the United States Army in 1958, and then worked for the New York Telephone Company for over 25 years.  He lived in Jackson Heights, Queens until retiring with his wife to The Villages in 1996. He played almost every sport throughout his life, and played them all with fervor. In his earlier years here in the Villages, he played on several travel softball teams. Throughout his time here he enjoyed many tennis leagues and golf groups, and loved his Skins’ games, and the friends he made. He loved music, and Broadway, and taking pictures. He cheered on the New York Mets and the Giants. He watched every single Sunday Morning, 60 Minutes, and Jeopardy. He was an avid reader, a crossword master, and an educated historian.  Above all, he was a true gentleman. John is survived by his daughter, Samantha, his son-in-law, Thomas, and his two grandsons, Joseph (23) and Matthew (19) Tarantola. May he forever Rest In Peace knowing how truly loved he is.

To send flowers to the family or plant a tree in memory of John Nee, please visit Tribute Store