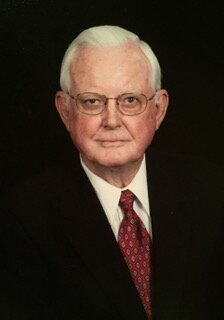 He was born August 10, 1928, the son of the late John Walter and Rosa Virginia (Moxley) Richardson.

William (Bill as he was known)  was originally from Wilkesboro, N.C. before moving to Florida in 1996. In 1950 he married his loving wife, Mary, and together the two shared many years of love and happiness before her passing in 2020.

Bill served in the US Navy. He graduated from Appalachian State University with a B.S.(1950) and M.A degree (1953). Bill earned his doctorate degree from The University of North Carolina at Chapel Hill. (1968)

Bill began his career with Lowes Companies in 1956 as a Corporate Merchandise Manager . He left his career with Lowe’s to be an instrumental part of the beginning of Wilkes Community College. He served the college as Dean of Instruction, Professor and Vice-President for over 20 years.

Bill was an executive Board Member, on the Joint Committee on Post-Secondary Articulation in North Carolina.

Chairman of the Deans of Instruction of the NC Community College System(1971-1972).

Chairman of the Board (1971-1974) and Executive Committee, Eastern Appalachian Children’s Council, Inc.

Member of the Board and Executive Committee, Regional Health Council of Eastern Appalachia.

Member of the Board and Executive Committee, Western North Carolina Health Systems Agency.

Bill was active in many Academic and professional honor and service programs. Active in the North Wilkesboro Presbyterian Church, where he enjoyed serving in many capacities but especially teaching Bible Study.

For rest and relaxation Bill would love to work in his yard, he planted thousands of azaleas and native western NC plants of all different varieties. He enjoyed people coming by and stopping while they were blooming. He always said he hoped that it made smiles to those that drove by. He also enjoyed golf and traveling with his family.

Bill and his wife Mary moved to Florida in 1996 and he continued to play golf and work in his new yard. He became active in the Church there and delivered homebound meals for many years.

Per the family’s request, no services for Bill will be held at this time.

Online condolences may be sent to hiers-baxley.com.

To send flowers to the family or plant a tree in memory of Dr. William Richardson, please visit Tribute Store

Share Your Memory of
Dr. William
Upload Your Memory View All Memories
Be the first to upload a memory!
Share A Memory
Send Flowers