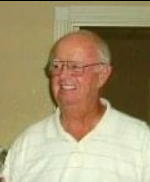 William C.  "Bill" Fenwick Sr., 82, of The Villages, Florida, formerly of Louisville, died peacefully on April 21, 2021 after a lengthy illness. He was born in Lebanon, KY to the late William "Wathen" and Edith Anne Fenwick.

Bill graduated from the first class of Tool and Die Makers at GE in the early 1960s and went on to own and operate Fenwick Machine and Tool in Piedmont, SC until his retirement in 2012.  He and his wife Kathy spent their retirement years doing what they loved most, playing golf.

He is preceded in death by his wife, Kathy Prinsen Fenwick; and three siblings, Tootsie Abell, Rubel Fenwick and Pat Fenwick.

His wishes were to be cremated and interred with his wife at Hillcrest Memorial Gardens, Leesburg, FL. A private service will take place at a later date.

Share Your Memory of
William C.  "Bill"
Upload Your Memory View All Memories
Be the first to upload a memory!