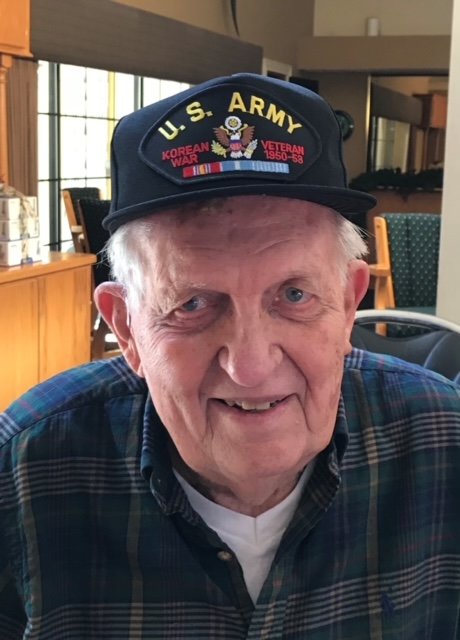 Warren Richard Erickson was born February 26, 1929 to Walter and Camilla (Young) Erickson in Chicago. Warren grew up in Elmhurst, Illinois where he attended York High School for two years. His family moved back to Chicago so he graduated from Austin High in Chicago. He then went on to graduate from Elmhurst College as an English major before being drafted by the US Army in 1950, where he served in the Korean War.

The majority of Warren’s working career was spent with the Meyercord Decal and Sign Company. During a season beginning in 1955, when the company had transferred him to their Kalasign division in Kalamazoo, MI, Warren met and married Norma Jean Koopsen on October 13, 1956. To this union, the couple was blessed with four children; David Warren, Richard Craig, Patricia Kristine and Barbara Jean.

In 1962, with four children under the age of five, Warren and Norma moved the family back to Elmhurst. Warren enjoyed sports of all sorts, participating in softball, golf and bowling. He was also active in Toastmasters, where his love of the written and spoken word was allowed to flourish. Warren is a lifetime servant of Jesus Christ. He has served in multiple roles on Consistory or Church Council, Sunday school teacher, choir member and song leader. He coached little league and spent many weekends on Boy Scout camping trips as Assistant Scout Master.

Warren was called home to be with his Lord and Savior on December 16, 2020, passing from this life at the Avante Senior Living Center in Leesburg, FL. Warren commented often on the importance of family. Those left to cherish his memory are his loving wife of 64 years, his four children and their spouses, eight grandchildren and six great-grandchildren. He was preceded in death by his parents, his Aunt Helen (Young), and his younger sister Marjorie Thiel.

Arrangements are being handled by Hiers-Baxley Funeral Services of Ocala, FL. In lieu of flowers, memorial contributions can be made to Joy Lutheran Church of Ocala or World Vision, for those who wish to participate.

To send flowers to the family or plant a tree in memory of Warren Erickson, please visit Tribute Store

Share Your Memory of
Warren
Upload Your Memory View All Memories
Be the first to upload a memory!
Share A Memory
Send Flowers