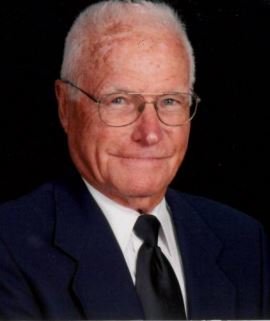 The service will be streamed live at this link.

Carey Eugene McDonald passed away peacefully in his sleep at The Windsor of Ocala on July 29, 2020 at the age of 95. He was born in rural Ware County/Waycross, Georgia on July 26, 1925 to Roy Jefferson McDonald and Nettie Mae (Booth) McDonald. Carey graduated from Waresboro (GA) High School with honors as Salutatorian in 1942. He quickly enrolled in South Georgia Jr. College in Douglas, GA and graduated in February, 1944 with honors and lettering on the basketball team. While there, Carey enlisted in the WWII U.S. Naval Reserve program. Immediately following graduation, he entered the US Navy V-12 OTC at Mercer University in Macon, GA. Next stop was Cornell University in a very cold Ithaca, NY for Midshipmen’s School followed by assignments in Great Lakes, IL, Radarman School in Fort Lauderdale, FL advanced training in Norfolk, VA and Boston, MA. Then Carey was off to Orange, TX to board the USS Corry (DD817) put into commission to patrol the South Atlantic for anti-submarine warfare. He was discharged from the Navy in July, 1946 in time to enroll in the fall session at the University of Georgia. Carey received his B.S. degree in Education and Mathematics in the Spring of 1947.

Immediately following Carey’s WWII naval service and graduation from UGA, Carey was employed by Nassau County, FL School Board as Athletic Director/Head Basketball coach at Callahan, FL High School and served there for 10 seasons including multiple trips to the State Basketball tournament. While at Callahan HS, he met and married Martha Evelyn Allen, a teacher at nearby Hilliard, FL HS. Together they became parents of Dale McDonald and the late Gayle (McDonald) Archer.

In the summer of 1957 Carey accepted an attractive offer to become the Head Basketball coach and advanced math teacher at Ocala, FL HS. He coached his OHS Wildcats to the Florida State Championship game in 1958. He continued coaching at OHS through 1964 with great success until retiring from coaching that year to enter OHS administration as Assistant Principal. In 1969, he was named Principal at North Marion, FL HS and served from 1969-1972. While at NMHS, he received multiple state awards for innovative academic/curriculum projects and athletic program improvements. Carey retired from his public education career in June, 1972 to pursue a fulltime career as Executive Director of the Florida Athletic Coaches Association.

Carey’s duties with the FACA included the first-ever production of a statewide publication the “Florida Coach” for HS and Junior High coaches, players and school administrative personnel. Additionally, he planned, directed, promoted and administered the now legendary FACA North-South All-Star football and basketball games. He was integral in the relocation of those games from Jacksonville to Gainesville for its more central location and greater facilities. In conjunction with the All-Star games, Carey also planned, directed and administered the FACA Coaches Clinic each summer. It should be noted that he had served as the FACA Executive Director on a part-time basis while he taught/coached at Callahan HS, Ocala HS and was principal at NMHS. Carey’s primary responsibilities with the FACA included the editing/ publishing/distribution of the “Florida Coach”, facilitating the All-Star Games and FACA Coaches Clinic during his summer vacation. He supervised more than 90 of the top football and basketball athletes and coaching staffs from all over the State of Florida many of whom would go on to star acrossthe country in college and in the NFL and NBA.

Carey made monumental contributions to upgrading and improving high school sports programs for both boys and girls in Florida. He took reports from the FACA Sports Committees on rules changes, meet regulations and academic compliance, consulted with each Sport’s chairperson, edited, clarified, prepared and presented to the Florida High School Activities Association Board of Directors for acceptance and implementation in Florida high school competition.

Florida coaches played a vital role in the birth, growth, development and nationwide expansion of the National High School Athletic Coaches Association (NHSACA) in 1965. Carey was elected the National President in 1966-67 and subsequently was named as the NHSACA Executive Director in 1973. Carey served concurrently both the FACA and NHSACA as Executive Director full-time from 1973-1977. These dual roles took a toll physically with more than 60,000 auto miles and more than 60,000 air miles annually. In the spring of 1977, he had a heart attack. His physicians convinced him that he had to choose between two associations that he dearly loved, FACA or NHSACA. After debate, Carey chose the NHSACA and turned the FACA over to his assistant Wink Barnette who would serve the FACA for thenext 32 years.

During the ‘70s and 80’s the NHSACA grew to over 40 state associations. Carey compiled, edited, published and distributed the first nationwide publication, the “National Coach” with subscriptions growing to over 125,000 with CEM at the helm. Little did Carey know that his WWII experience as the shipboard daily news editor via Armed Services Radio would prove to be so valuable! His one semester of Typing at Waresboro HS was a terrific investment throughout his career.

Carey had a rare and unique ability to work with other regional and national sports and educational groups throughout the nation. His knack for networking and legendary memory of names/faces/details became invaluable to the NHSACA with the birth of ESPN, US Drug Enforcement Administration (DEA), Sporting Goods Manufacturers Association (SGMA), NCAA, NFL, MLB, NBA, Boy Scouts, Special Olympics, Fellowship of Christian Athletes (FCA), Nabisco and myriad of other entities. ALL in support of high school sports! He maintained ongoing personal relationships with key people in all these national groups. Pete Rozelle, Walter Byers, Dick Vitale, Coach John Wooden, Faye Vincent, Gene Upshaw, Eunice Kennedy Shriver, Coach Tom Landry, Nancy Reagan and literally thousands of high school and college head coaches in ALL sports.

Back in the 50’s as a result of trip to the State Championship game in 1958, Carey was rewarded an OHS Booster Club-backed trip to the NCAA Final Four in Louisville KY. Since that date he had attended 57 consecutive Final Fours and its accompanying National Association of Basketball Coaches convention with that incredible streak ending in his last trip in 2014 to watch our Gators in Dallas. As if that wasn’t special enough, Carey could point to more than 25 trips to attend The Masters during that span always on back-to-back weekends. Many of you will notice that his graveplate reads “I was the luckiest man on earth!”

The family will be having a viewing at Hiers-Baxley Funeral Home, 910 SE Silver Springs Blvd, Ocala, FL on Friday, Aug 7th from 2:00 PM to 8:00 PM, The family is observing social distancing during this time with limited numbers allowed in the funeral home at one time, The guest book will be available during this time just outside the main entrance of the funeral home with no limited number restrictions.

The family is going to have a celebration of live service on Saturday, August 8th at 10:00 AM at the First United Methodist of Ocala, The church is observing the CDC guide lines for the service, and thus has limited seating of 10 people, (invitation).  The service will be streamed live at this link: https://client.tribucast.com/tcid/366244431

The Navy will present honors to the family at the church during the services.

The burial will take place directly following the services at Highland Memorial Park, at  approximately 11:30am.  All are welcome to attend where CDC guidelines are less stringent.  10 people in the immediate vicinity of the grave, all others may fan out across the grounds maintaining appropriate distances.

Donations in lieu of flowers can be made to the First United Methodist Church Building fund in memory of Carey.

Share Your Memory of
Carey
Upload Your Memory View All Memories
Be the first to upload a memory!