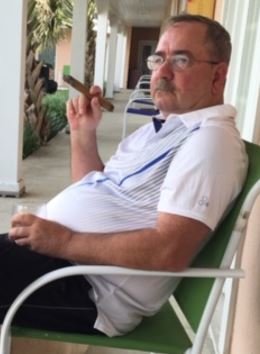 Glynn Edward Street, born December 4, 1954 in Prentiss, Mississippi to Brown Street and Lois Rollins, of The Villages, Florida passed away on Thursday, January 23, 2020 following complications from heart surgery, he was 65 years young.

Glynn was the love of his wife of 43 years, Stephanie Street. The father of Richard; brother of Roy Allen of Texas, Frances Marlene Morse, Theresa Gladine Ryan, and Connie Smith all of Mississippi; and brother-in-law of Alice Allen of Texas, Sue Golmon of Mississippi, Mary Vaughan of The Villages and Antoinette (Toni) and James Downing of Washington. He was the favorite Uncle to a host of nieces, nephews, grand-nieces, and grand-nephews throughout the country.

Glynn was a proud veteran of The United States Navy (1974-1980). His tour of duties included the Joint Liaison Office, Naples, Italy (1974-1976) where he met and married Stephanie, and the National Security Agency, Fort Meade, Maryland (1976-1980).  He continued to serve his country at the National Security Agency (1984-2013) where he held several positions within most of the Agency earning a host of awards.  While at the National Security Agency, Glynn was stationed at RAF Menwith Hill Station, North Yorkshire, England (1986-1991), he also served a total of ten months in Baghdad, Iraq.  Glynn and his family resided in Anne Arundel County Maryland off and on for the better part of 43 years until Stephanie’s retirement in 2016.

Glynn was an avid fisherman, nothing like wetting a hook on a clear blue day, and he taught his wife to enjoy a day on the water; a hunter, wow, first deer or goose of the season whether he had the kill or one of his hunting buddies got the first; a golfer who had enough patience to teach his wife to hit a golf ball, the first tee of the season with the King and his court; and a reader, science fiction and fantasy, go figure.  Glynn was a very passionate self-taught cook (thank you Alton Brown!), he loved to cook the basics and the gourmet for anyone and everyone.  In the earlier days, yes, many a dish was trashed (Stephanie’s too!).  Glynn was also a great dancer, no dance he could not do or at least attempt, our friends from Menwith Hill are reminded of his “Dirty Dancing.”

A gathering of family and friends will be held on Saturday, February 8, 2020 from 10-11 AM, with a celebration of life service, conducted by Lloyd Rollins, to follow at 11 AM, located at Hiers-Baxley Funeral and Cremation Life Event Center, 3975 Wedgewood Lane, The Villages, Florida 32162.

In lieu of flowers please consider making a donation in his memory to St. Jude’s.

Online sentiments can be shared at hiers-baxley.com.

To send flowers to the family or plant a tree in memory of Glynn Street, please visit Tribute Store
Saturday
8
February

Gathering of Friends and Family

In lieu of flowers

please consider making a donation in his memory to St. Jude’s.

Share Your Memory of
Glynn
Upload Your Memory View All Memories
Be the first to upload a memory!
Share A Memory
Send Flowers