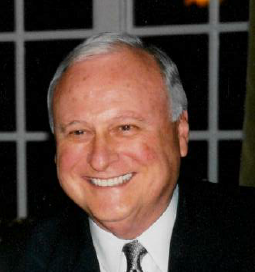 Whitfield McRory Palmer, Jr., 90, of Ocala passed away on Wednesday, January 1, 2020 at home. Whit was a third-generation Floridian and native of Ocala. He was born March 28, 1929 to Whitfield and Margaret Palmer. Whit attended Blessed Trinity School, Suwannee Military Academy, and the University of Florida.

Whit began his career in the mining industry with Dixie Lime and Stone Co., and became president and CEO. He was chairman of Florida Crushed Stone Co. and later purchased MFM Industries. As president of Paddock Park Development, Whit was a real estate developer in Marion County. He also served as president and chairman of HydroMentia, Inc., an aquatic plant-based water treatment company for large scale environmental restoration.

Whit was engaged in many business, civic, and charitable organizations. He served as a director of the Federal Reserve Bank of Atlanta, Jacksonville Branch, and SunTrust Bank of Ocala. He was a member and former Chairman of the Florida Council of 100. Whit’s commitment to Florida’s economic growth includes serving on the boards of Florida TaxWatch, Florida Chamber of Commerce, National Crushed Stone Association, and the National Association of Manufacturers.

Whit’s love for the University of Florida is reflected in his lifelong commitment to that institution; he is the only alumnus who simultaneously served as president of the UF Alumni Association and president of the UF Foundation. He is a past recipient of UF’s Distinguished Alumnus Award and the President’s Medallion. He also served on the board of UF Health Shands Hospital.

When actor Paul Newman decided to build a Hole in the Wall Gang Camp in Florida for children with serious and life-threatening diseases, he recruited Whit to lead the successful effort to build and establish what is now Camp Boggy Creek. Whit also served on the board of Munroe Regional Medical Center, Munroe Foundation, CFCC and was instrumental in the establishment of Phoenix House in Citra.

He was preceded in death by his wife, Polly Palmer who died in 1985; son, Henry “Chip” Palmer; sisters, Virginia Swindal and Margaret Palmer Ayres, MD.

A memorial service will be held at 11:00 am on Saturday, January 4, 2020 at Christ the King Angelican Church (4440 SE 3rd Avenue, Ocala, FL). In lieu of flowers, donations may be made to Boggy Creek Camp, Interfaith Emergency Services, Boys and Girls Club of Marion County, or the charity of your choice. Online condolences may be sent at www.hiers-baxley.com.

To send flowers to the family or plant a tree in memory of Whitfield Palmer, Jr., please visit Tribute Store
Saturday
4
January

Share Your Memory of
Whitfield
Upload Your Memory View All Memories
Be the first to upload a memory!
Share A Memory
Send Flowers