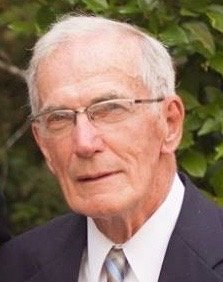 William (Bill) Earl Slocum, age 83, of Ocala, Florida, died peacefully on the evening of August 9, at Hospice of Marion County, in Ocala, Florida. He was born March 16, 1936 in Waukegan, IL, to the late Wesley and Dorothy Slocum, and was one of three children.

The family settled in Waukegan, IL, where Bill graduated from high school. Upon graduation, Bill enlisted in the United States Army, and served in Korea, before being honorably discharged. He graduated with a Bachelor’s Degree from Rockford College in 1961. Bill married Barbara Bond on September 5, 1959, settled in Roscoe, IL, where they raised three sons. They were blessed to be married for 60 years.

Bill was an exceptional family man. He enjoyed travelling, theater, watching youth activities and running. Highlights for him were qualifying and running in the Boston Marathon, retirement in Florida, and watching the Cubs and Bears win championships in his lifetime. In Illinois, he was an active member and President of the Roscoe Lions Club and coached Little League baseball. In Florida, he was an active volunteer in his community for the kitchen club and enjoyed playing Bocce.

Arrangements to be handled by Hiers-Baxley Funeral Services, Ocala, FL.  (352)-629-7171.  Online Condolences may be expressed at www.hiers-baxley.com.