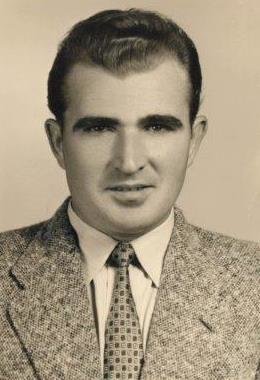 Adam passed from this life on Monday July 30, 1929. He died comfortably in his home with his wife of sixty years nearby. Adam was born in Franzfeld, Yugoslavia on November 11, 1929. Predeceased by his parents Johann and Katharina Scheuermann, a sister in infancy, older brother John, younger brother Fred and infant grandson Michael Charles (whom he nicknamed Smiley). He is survived by his wife Elisa (nee Fink), children Eleanor (Herbert) and Linda (Robert) and grandchildren Schuyler Adam (Brianne), Shana and Thomas Adam .According to the law in Yugoslavia at the time, schooling was from ages seven to thirteen. Adam worked on his parents’ farm from a very young age. From the age of twelve years, he took on most of his father’s responsibilities because he was called into military service (WWII). Adam became a civilian prisoner at the age of fifteen and was taken to a Russian labor camp for nearly three years. Upon his release, he found his family scattered and his homeland lost. He made his way first to Austria, and then to live in Germany. He reunited with his family when he was a young man. He lived there as a refugee until 1957, when he emigrated to the United States. The ship he traveled on, the General Harry Taylor, arrived in New York City on January 24, 1957. He returned to Germany to marry his wife, Elisa, on July 21, 1959. Adam became a U.S. citizen in 1965. He lived in New Jersey for nearly sixty-two years before moving to Belleview, Florida in October 2018.Besides working on his parents’ and other farms – which never quite left him as was evidenced by the myriad of fruits and vegetables grown in his own yard, the enjoyment of the u-pick experiences he had and driving through farmlands viewing the animals and crops - he worked as a weaver in Europe and machinist in the United States. He was not a highly educated man, but after he was laid off in 1992, he sought out vocational classes through the employment office. “You’re never too old to learn something” he would say. Adam was at his best working with his hands – repairing, refinishing and building something from scratch. His family were recipients of many projects he undertook. Although Adam was not one for leisurely activities, he did play on a soccer team in Europe and in the U.S. He also enjoyed fishing – anywhere, anytime and with anyone. He will be missed, but he lives on in our memories, the faces and mannerisms of his children, and in the names of his grandchildren. May Our Heavenly Father grant him peace. In lieu of flowers, a donation may be made to : Grace Presbyterian Church, 2255 SE 38th Street ,Ocala, Florida 34480 (Mercy Ministry or Library fund)

To send flowers to the family of Adam Scheuermann, please visit Tribute Store

Share Your Memory of
Adam
Upload Your Memory View All Memories
Be the first to upload a memory!
Share A Memory
Send Flowers