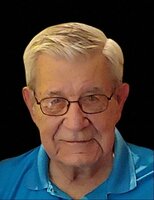 Mr. Rodney Dean Kosters Sr., age 91, of The Villages, FL went to be with his Lord on March 27, 2022. Surviving are his wife of 65 years, Anna Kosters, his daughter-in-law Karen Kosters, his daughter Gayle Sikkema (Ben), his grandchildren Ryan (Donique) Kosters, Lisa (Kurt) Vander Veen, Steven Sikkema, Jake Sikkema and Rodney Kosters III, 6 great-grandchildren, sister-in-law, Janice Vande Schraaf, many nephews, nieces and friends. He was preceded in death by his parents, brothers, sisters, son, Rodney Kosters Jr., and grandsons, Danny Sikkema and Joey Sikkema. Rodney was born in Rock Rapids, IA on a farm. He was the youngest of 8 children. At 17, he joined the Navy and proudly served 7 years during the Korean War. He moved to MI where he met his wife and was the owner of Kosters’ Body Shop and Garage. Upon his retirement in 1989 he moved to FL. He was an active member of First Baptist Church The Villages. He loved to play golf (he played until he was 90), and watch basketball and westerns. He loved the Lord and was a faithful servant always grateful for his many blessings. In lieu of flowers, memorial contributions to Cornerstone Hospice, The Villages at 601 Mariposa Way, The Villages, FL 32162 or online at www.cornerstonehospice.org would be appreciated. A Celebration of Life will be held on July 1, 11:00 am at Heirs-Baxley Funeral Home with interment at 2:30 pm at the Florida National Cemetery, Bushnell. Jesus said, “I am the resurrection and the life. He who believes in me will live, even though he dies; and whoever lives and believes in me will never die.” John 11:25-26