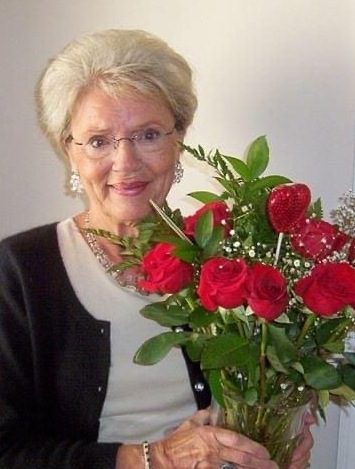 Geraldine M. Gehrke, age 83, passed away at her home in the Villages on January 12, 2022 after a valiant fight against cancer.

Geraldine was born on August 18, 1938 to Ingolf and Violet Monson in Milltown, WI. She was raised in Polk County on the family farm along with her sisters Loretta (Punkie) and Linda and brothers Loren (Sonny) and Leonard. She graduated from Milltown High School in 1956. After high school she went on to marry Derald Gehrke on January 12, 1957 and then they raised three children – Jeffrey, Julie, and Scott. The day after their wedding they relocated from Wisconsin to Peasleeville in upstate New York. The family moved numerous times over the years for work with the Kirby company. They started out in Plattsburgh NY, then went to Oriskany/Utica NY, from there to Mattydale NY, then on to Endwell NY. Next they moved to South Weymouth MA, then on to Boscobel WI, and then to Kirkwood MO. The children moved on to college and their own lives at that point. Jeff is now in Wisconsin, Julie is in California, and Scott is in Florida. After some time in retirement Geraldine and Derald made their final move to the Villages FL where they enjoyed the warm Florida sunshine and the many activities the Villages offers for seniors.

Geraldine learned accounting through a learn at home mail study program. She used these skills she learned to help her husband manage multiple Kirby Vacuum Cleaner offices, and ultimately she was the Executive Secretary to the President of the Central States Kirby Division. She worked for over 20 years in that position retiring in 1999.

Geraldine had a number of talents including creating exquisite porcelain dolls, crocheting and sewing, and cooking. She was fun loving and enjoyed dancing, playing cards, and travel.

She is preceded in death by her parents Ingolf and Violet Monson, her sister Loretta, and her beloved dogs Tigger and Cooper.

She is survived by her husband Derald Gehrke, her children Jeffrey (Melodie) Gehrke, Julie (Robert) Miller, and Scott Gehrke (Bill Magennis), as well as 6 grandchildren and 2 great-grandchildren.

Geraldine will be laid to rest at the Florida National Cemetery in Bushnell FL where she will await her dear husband.

In lieu of flowers the family requests contributions be made to the American Cancer Society at www.cancer.org.