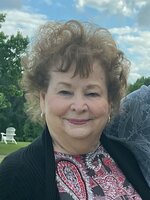 A life-long Floridian, she was born in Miami, Florida on June 22, 1939. She was a 1957 graduate of Fort Lauderdale High School, and attended Stetson University, where she performed in the concert choir. In 1960, she relocated to Ocala with her family. Phyllis worked at Dixie Lime and Stone, where she met the love of her life, Jim Bubin. They were married in 1963 and raised three daughters. She was employed at St. John Lutheran School before moving to Ward Highlands Elementary School. She worked in the media center and shared her love of reading with many children and retired in 2006. Phyllis was a devoted wife, mother and grandmother who provided unconditional love and relied heavily on her Christian faith. She was the perfect example of an angel walking this earth who welcomed each day with a positive attitude and a smile on her face.

She is survived by her three daughters; Julie (Keith) Foust, Jeanne (Brian) Pelski, Jill (Billy) Caruthers. She was affectionately called “Meme” by her seven grandchildren; Stephanie, Jessica and Andrew Pelski, Connor and Chandler Foust, Mackenzie (Hank) Pearson and Mason Caruthers. Recently, Meme celebrated the birth of her first greatgrandchild, Hadley Denise Pearson. She is also survived by her two siblings; Don (Lenojo) Carter and Sandy (Brad) Hicks. She was preceded in death by her husband, James “Jim” Bubin.  A private service was held on Saturday, October 23, 2021, and officiated by her brother-in-law, Dr. Brad Hicks.

Online condolences may be sent to: www.hiers-baxley.net