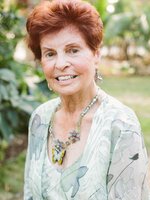 We are heartbroken to share that on August 23, 2021, Barbara Jean Henn, beloved mother and grandmother, left her earthly body after a brave fight with Covid-19.

Barbara leaves behind a devoted son, Jerry Henn, daughter-in-law, Cherie Henn, three grandchildren, Lauren Henn Devaney, JJ Henn, and Alexa Cassidy, six great-grandchildren, her dog Buddy, and the many beloved friends she made at The Villages and on her international bike trips.

Barbara was preceded in death by her one great love Ronald Eugene Henn. Meeting at 16, they eloped at 18, raised a son together and stayed united in marriage until his passing in 2000. We are warmed at the thought of their reunion along with her beloved dog Duffy, in Heaven.

Although we deeply mourn her loss, we will keep her legacy alive by discovering new places from the seat of a bicycle, staying curious about the world, and always finding time to stop for a magnum ice cream bar.

In lieu of flowers, please donate to Heifer International, a charity dear to her heart, in her memory.