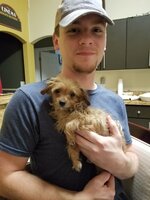 Jeremy Lane Hartley embraced eternal life suddenly in his home at the age of 24 on Thursday, August 5th, 2021. He was a loving son who leaves behind two parents, Ronnie and Sheila, that love him more than words can express. He also leaves behind too many friends to list around Ocala and in his home state of Oklahoma.

He was born October 7th, 1996, the son of Ronnie Hartley and Sheila (Chaney) Jernigan. Jeremy was a native of Guthrie, Oklahoma, before moving to Florida at a young age. He was a United States Army Veteran who was proud to serve his country.

Jeremy was a quiet and private young man who had a loving and kind heart. He always loved to experience new things in life. He enjoyed spending time with his family and friends and going to new places he had never been. Jeremy was known for his enormous heart and his listening ear. Jeremy had a love for art, poetry, animals, and the Outdoors. He loved to practice shooting his bow, playing the guitar, and going fishing. He also enjoyed kayaking, biking, and hiking the trails.

Until sometime around 2013, Jeremy remained the same solidly grounded and engaged person he had been throughout his entire life. But sometime around 2013, with little warning, he slid into a depression from which he seemed to be emerging during his final weeks. This depression was compounded by substance use and the loss of his identical twin brother Josh the prior year.

His decision to take his own life – a life of so much promise – was completely unexpected and shocked everyone who knew him.

Jeremy's true friends will recall the sheer pleasure of his company, how good he made them feel, how free they were to be themselves around him, and how much they will miss him.

Jeremy cared about people in the purest way. He loved them for who they were and because he wished the best for them, without guile and without asking anything in return.

What you saw with Jeremy was always what you got, and what you saw – if you were lucky enough to be his friend – was a genuinely delightful, generous, easy-going, fun-loving human being.

Jeremy had so much goodness. He had so much capacity to bring happiness to others and such a bright future. The world is a lesser place without him.

Build Me a Son, O Lord

"Build me a son, O Lord, who will be strong enough to know when he is weak and brave enough to face himself when he is afraid; one who will be proud and unbending in honest defeat, and humble and gentle in victory.

Build me a son whose wishbone will not be where his backbone should be; a son who will know Thee and that to know himself is the foundation stone of knowledge. Lead him, I pray, not in the path of ease and comfort, but under the stress and spur of difficulties and challenge. Here let him learn to stand up in the storm; here, let him learn compassion for those who fail.

Then I, his father, will dare to whisper, "I have not lived in vain."

He was preceded in death by his identical twin brother, Joshua Hartley, and his Grandfather, Marvin "Tom" Wilson.

A memorial service for Jeremy will be held at Hiers-Baxley Funeral Services (910 E Silver Springs Blvd., Ocala, FL 34470) on Saturday, August 21st at 6:00 pm. A gathering will be held from 5:00 pm until the time of the service. Friends and family are invited to visit with Jeremy's family. In lieu of flowers, donations may be made to Jeremy's family in the way of a GoFundMe https://gofund.me/68e0dec7 . Online condolences may be left to hiers-baxley.com.