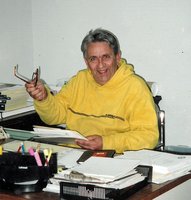 Francis T. “Frank” D’Onofrio, age 79, of Ocala, FL passed away on Tuesday April 6, 2021.  He was born in Hartford, CT, a son of the late Dominic and Agnes (Thomas) D’Onofrio and lived most of his life in Connecticut.  Francis attended UConn, Connecticut Institute of Technology, served in the National Guard and worked 46 years as a Professional Engineer and Surveyor for himself and the cities  of Hartford and Bridgeport, CT.  Over the years, he enjoyed coaching little league games, bowling, watching and attending Yankee games, being a past member of The Knights of Columbus and loved watching all Western shows.  Francis was a lover of the ocean and was at peace when he was around it.  He leaves behind his former wife Bonnie (Parker) and their two sons Matthew D’Onofrio and his wife Laura, Lucas D’Onofrio and partner Sarah, and his grandchildren Brandon, Isabelle, Mackenzie, and Judson.  He is survived by his sister Lorraine and predeceased by his brother Richard (in 2016), and leaves behind many nieces; Dawn, Cindy, Kelly, Marissa, and Kimberlee, nephew Timothy, great-nieces and great-nephews whom he was very close to.  Funeral services for Francis will be held on (date and location and info) In lieu of flowers, we are asking that you make a donation to your favorite charity in his name.  Arrangements are being handled by Hiers-Baxley Funeral Services Timberridge Chapel (352) 873-4114.  Online Condolences may be expressed at www.hiers-baxley.com.