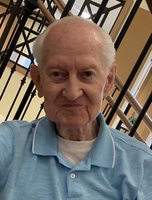 James Joseph was born to Mary and John Mikolay on July 14, 1931 in Newark, NJ. Jim had two older brothers John and Edward. All three served in the Navy. Jim served during the Korean War from 1950 to 1953.

During this time the three boys met three girls, who were sisters. 3 brothers, 3 sisters; can't make that up! Eventually they all were married to each other. Unlike his two brothers, Jim and his wife Angelina never had children. However they treated their 10 nieces and nephews as if they were their own children. Anytime they needed something, Uncle Jimmy was there.

Jim worked for Hotpoint and General Electric, before starting his own business. He was always a hard worker, even at home. He always found something to do, he never sat still. Jim could be very funny at times but then also very stubborn

(it was his way or no way). But in any case, he was a very religious and generous man who was loved by everyone.

After Jim retired in 1995, he and Angelina moved from NJ to Ocala, FL. They had only a short time together in their Oak Run home because Angelina fell ill and passed away in 1997. They were married for 41 years. A few years later,

Jim met a woman named Rita in an eye doctors office. They became friends and were married in the year 2000. They were only married for 2 1/2 years when Rita became sick and passed away. After being alone for quite some time,

Jim decided to sell his home and move into the assisted living at Bridgewater Park. He resided there for almost 2 years and quietly passed away on March 27th at the age of 89. Even though we all know that Jim is now in a better place, he will truly be missed.

The family is going to service on Wed, April 7th at Queen of Peace Catholic Church at 8:30 AM, with the burial to follow at Highland Memorial with Navy honors being presented. Arrangements by Hiers-Baxley Funeral Services, 352-873-4114