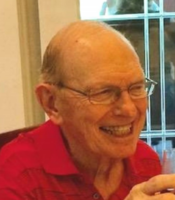 Gustave Victor Probst, Jr. (eldest son of Gustave Victor Probst, Sr. and Edna Woolley Probst) was born on May 19, 1932, in Brooklyn, New York, and passed from this earth in his home in Summerfield, Florida on March 13, 2021, with his much-loved daughter-in-law, Linda, and his nurse/caregivers, Cynthia White and Tammy Holloway, at his side.

He is predeceased by his beloved wife of forty-six years, Wanda Jane (Fischer) Probst and his first wife, Eva Elizabeth (McGivney) Probst, as well as by his brothers Arthur Probst and Donald Probst and his sister Joyce Probst LeClaire. He is survived by his children, Robert Probst (Roberta), Ronald Probst (Linda) and Robin Maderich, his seven grandchildren (and their spouses/significant others), as well as his three great-grandchildren. Gustave or, as he preferred, Gus also leaves behind his many nieces, nephews, their spouses and children.

Gus Probst married Eva Elizabeth McGivney on February 18, 1955 and together they had the three above-mentioned children. They remained married until Eva passed away at a young age in May of 1972. Gus married Wanda Fisher on September 21, 1974, and they had forty-six years together before her passing.

Gus graduated from Brooklyn Tech in 1950, from which he received a half-scholarship to Georgia Tech. He also received a partial scholarship to MIT. However, due to financial constraints, he enlisted in the United States Navy where he served as a CT2 during the Korean War, but also made a name for himself in boxing and was crowned Table Tennis Champion of California while stationed there. Upon his exit from the Navy, he worked for the Department of Defense - National Security Agency and returned to civilian life as a Methods Programmer at RCA. From 1962 to 1984 he worked as the Manager of Application Support for General Foods, and then as Systems Development Manager when Gaines Food took over General Foods. Following early retirement from Gaines Foods in 1986, he started his own business, Creative Systems Solutions, and also developed software for various applications. He also worked for Georgia Temps as a Technical Recruiter until 1993, after which he and his wife, Wanda, retired.

Gus’s love of golf started at an early age and he spent as much time as he could playing the game, until a shoulder injury late in life prevented him from continuing. Still, he watched the championships faithfully and had his favorite golfers to root on. He and Wanda moved to Kissimmee, Florida in 1996 and to the Stonecrest Community in Summerfield, Florida in 2007, where they made lasting friendships among their neighbors and where, at the Remington in Kissimmee, Gus made his infamous hole-in-one when he refused to leave the golf course in the face of a tornado. Gus loved to dance with Wanda and together they set out to learn the finer points of ballroom dancing as well as general modern dance from the Fifties through the Eighties, taking to the floor at every opportunity to “Hustle” with more energy than those much younger in age. He is remembered by many by the fond moniker “Twinkle Toes.”

Gus Probst was a loving father, grandfather and great-grandfather, taking heartfelt interest in the lives of the younger generations and never failing to ask each how they were faring in their daily lives, their goals, their aspirations. He is also fondly remembered by others in his life who, upon hearing of his passing, expressed both their sadness and happy memories of his smile, his laughter, and, of course, his dancing.

In the tradition of Stonecrest’s community, Gus Probst received a star beside his engraved name on the granite memorial in the Stonecrest Veteran’s Memorial Garden, honoring both his status as a veteran and his passing. No public service is being held at this time due to the continued pandemic. Gustave V. Probst will be interred together with his wife, Wanda J. Probst, at Bushnell National Cemetery on Friday morning, May 28, 2021, with military honors. The graveside service will be limited to family members only. To commemorate the passing and the life of Gustave Victor Probst, it is asked that you provide a donation to the charity of your choice in his name, or to www.parkinson.org.

“Always do your best and you will never have any regrets…”