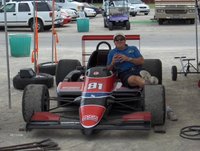 Michael Campanelli, 74, of Ocala, Florida passed away at Cate’s Hospice House in Ocala on February 20, 2021. He was born March 8, 1946 the son of the late Nicoletta Riccardi and Cosmo Damiano Campanelli. Michael was a native of Grumo Appula, Italy, he served in the US Airforce during the Vietnam era and then moved to the Ocala area in 1974. His passion has always been auto racing and he owned his own business, Cavallino Automobili, working on foreign and exotic cars in Ocala. He continued to race until his retirement and was also an instructor for aspiring race car drivers. He was a lifetime member of the Sports Car Club of America (SCCA). One of his dreams was to write a novel which he published in 2013 called Time Transporters. He will be forever missed.

He is preceded in death by his parents and sister, Maria Campanelli Cice.

Per Michael’s request, he will be interred in Italy. Services will remain private for the family. In lieu of flowers, donations may be made to St. Jude or The American Cancer Society. Online condolences may be sent to hiers-baxley.com.