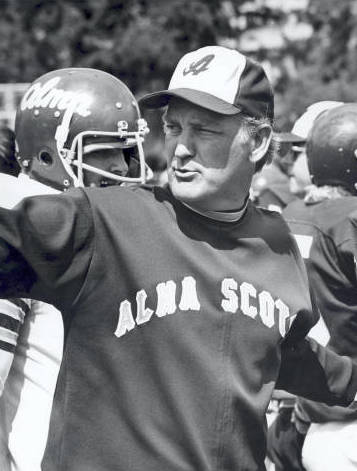 William Gerald Klenk passed away on Saturday, August 1, 2020 in The Villages, Florida at the age of 83.

He was born on May 21, 1937, in Detroit, Michigan. Although his given name was William, those who knew him and loved him called him Dad, Grandpa, Bill, Coach, and The Colonel.

Bill is the son of Pauline and John Klenk and brother of Barbara Holmes, Sharon Malay, and Harold “Hal” Klenk. He graduated with a Bachelor of Arts degree from Alma College and earned his Master of Education degree from the University of Southern Illinois. As an athlete at Alma, he earned seven varsity letters in baseball, basketball, and football and was inducted into the Alma College Hall of Fame for achievements in these sports.

On August 13, 1965 he married Elaine Grace Hamilton. As a newly married couple, they moved to Alma, Michigan so Bill could begin his legendary 32-year career at his alma mater. During his tenure he filled a variety of positions and roles including head coach for baseball, men’s and women’s basketball, and assistant football coach. Bill taught classes within the Physical Education department and served as Athletic Director.

After his retirement in 1997, he and Elaine moved to The Villages, Florida where they enjoyed golfing and playing pickleball with their close friends. In 2000 he was honored as the namesake for the new Alma College baseball facility, Klenk Park. In retirement he continued to work tirelessly to uphold Alma College athletics by supporting the annual Baseball Endowment Fund Dinner and the Klenk Open Golf Outing. In 2015, he was inducted in the Alma College Hall of Fame for a second time in recognition of his coaching successes; in his career Bill won seven MIAA Championships. He received the Campus Involvement Ambassador of the Year Award in 2017 and was the grand marshal of the Alma College homecoming parade in 2018.

After a valiant fight, his wife Elaine succumbed to cancer in 2012. Later Bill was fortunate to meet Ginny Poe, who became his wife and champion for the last six years of his life. They were active members of The Congregational Church of Summerfield, Florida. Bill is beloved by many; the Klenk family, Elaine’s family, Ginny’s family and his extensive Alma College ‘Tartan’ family.

Bill has inspired hundreds of student-athletes, co-workers, friends, and family members with his optimism, determination, and persistence in the face of adversity. At age 79 Bill learned to use a prosthetic leg and continued to golf, exercise, coach, and inspire.

He is loved greatly by his three children, Kari, Steven, and Kristi, his son-in-law, Will, and his grandson Louis.

The family is planning a private service in The Villages, Florida on August 22, 2020. Bill was a Veteran of the US Army and will be honored with a military tribute.

His children are planning a memorial event in Alma, MI in conjunction with the Klenk Open in June of 2021.

For online gifts – website: www.alma.edu/giving/make-a-gift/online-giving/  In the Designation menu, select “Other”.  In the Specify Designation Box type “Baseball Endowment in Memory of Bill Klenk”