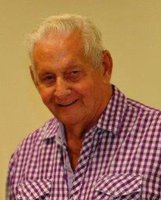 Francis was born in Brooklyn, NY, the 6th child of the late Philip and Elizabeth Hein.  He went by the name of Frank or Frankie.  He served in the Army as military police from 1962 to 1964 and with the US Coast Guard Auxiliary from 1986 to 1990.  Frank also worked with the Republican Party, campaigning for many winning candidates.  He was in construction and did handyman work most of his life.

Frank was a member of the Knights of Columbus, serving 2 terms as grand knight and other offices in New York before moving to Ocala, where he served as trustee.  He volunteered his time at soup kitchens, Brother’s Keepers, Christopher Club and all functions that the Knights of Columbus sponsored, such as carnivals, Tootsie Roll drives, Texas holdem and Bingo.

In his younger years he had a gift for playing Santa Claus for the family at his parents’ home.  However, as the family grew, he had to find a different place, such as the Knights of Columbus Hall, to accommodate everyone.  Not only did the family celebrate Christmas, but these gatherings also became family reunions.  He played Santa for the Knights and other personal friends as well.

He was a very giving person who would help anyone.  He will be missed.